You are here: Home / Foto of the Week / Church Pews Full Post Default 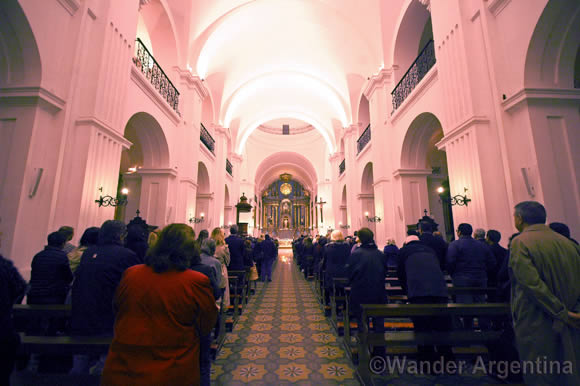 One day after Argentina defaulted, the pews at San Ignacio de Loyola Church were relatively full at the same time that President Cristina Kirchner addressed the nation a block away at the Casa Rosada. While those in attendance at Buenos Aires’ oldest church prayed, much of the nation was glued to the TV to hear the address, the first from the president since the S&P declared the country in default.

Kirchner proclaimed that the country is not technically in default and that a new word should be invented because “impeding payment is not a default”. She also announced that pensions would be raised 17.2% to AR$3,231 per month.

San Ignacio Cathedral dates to 1686. The church served as military barracks during the English invasion and the bell tower served as a lookout for pirates. The church was celebrating La Fiesta de San Ignacio to honor the Jesuit priest, Ignatius of Loyola, for whom the church is named. Bolivar, the street the church is located on, debuted its new cobblestone pedestrian look the same day.