You are here: Home / Archives for Buenos Aires / Bars 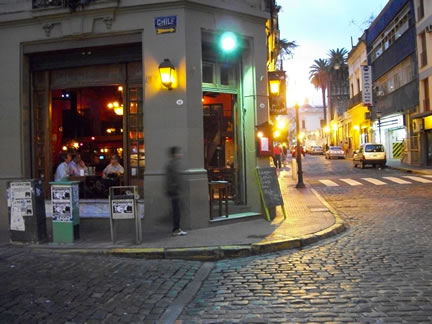 Bar Seddon is a nostalgic refuge on one of the nicest little cobble-stoned corners of San Telmo. It’s a seductive destination to enjoy a coffee while gazing out the window or to linger over a bottle of Malbec on a casual date.

Seddon is overseen by the friendly owner, Pamela, which kind of makes you feel like you’re hanging out at your favorite eccentric aunt’s house. Her dad, who founded the much-mourned original Seddon downtown, has since passed away but you’ll still find Pam’s mom hanging out almost everyday. In the good old days, Seddon was one of the best venues to see Cuban, blues and rock and roll music live in San Telmo. Unfortunately the city government started enforcing zoning laws limiting live music in bars, but there is still always a cool selection of tunes playing over the stereo system at a volume that still allows for conversation.

So beloved is Bar Seddon that it is declared a ‘notable’ bar of historical significance by the city of Buenos Aires. This is more of a bar than a restaurant but the reasonably priced menu does include a few typical Argentine dishes as well as pizza, pastas and meat and cheese platters.

The crowd tends to be down-to-earth, cultured Porteños with mix of international visitors. Here you’ll enjoy a relaxed old-school San Telmo vibe, which is a pleasant contrast to the ‘fashion’ bars of the more upscale Palermo neighborhood. 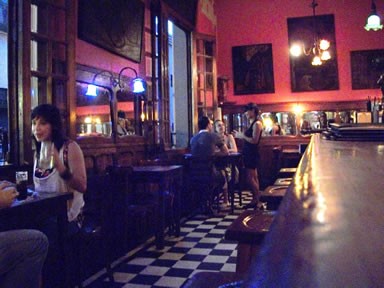 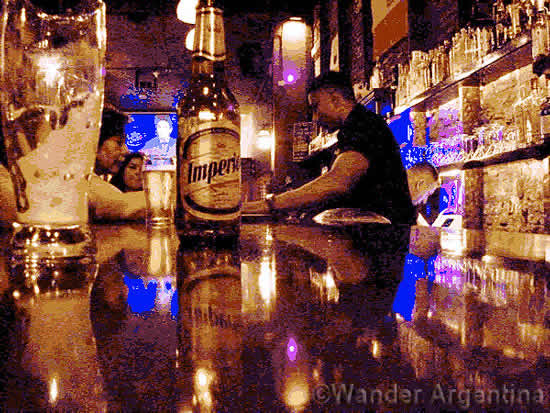 * Editor’s note: this bar closed in August of 2018. Feel free to check out nearby La Poesia, Gibraltar a couple of blocks away or the historic Bar Britanico, or see our list of other bars in Buenos Aires

First there was Gibraltar, then there was Puerta Roja, now there is Krakow. As the name implies, this pub is Polish-owned and is a nice spot in San Telmo to grab a drink among an international mix of travelers and neighborhood folk.

The stylish low-lit pub has a nice spacious bar, low-slung couches and in the rear of the bar, board games and a Wii play center so that the video generation doesn’t feel left out.

Although there is a big screen in the back and sometimes games on the tube, the floor space isn’t dominated by TV’s like so many other bars in the city. Behind the bar you’ll find one bulldog who nevertheless does a good job taking care of the music, co-owner Toman Pytel and a sweet-faced Dominican — look to him to keep your drinks flowing. The darling bilingual servers also do a good job making sure you don’t go thirsty.

There is a good selection of liquors including Polish vodka, and some nice brews on tap, including the Antares line, an Argentine microbrew with a couple of varieties of stout for those looking for a break from the watery national brand, Quilmes. The menu has the basic cheese plates, sandwiches, hamburgers, but your best bet is the Polish specialties such as sausage and sauerkraut, Pierogi (Polish raviolis) and for dessert, apple pancakes. The kitchen is open until 1 a.m. 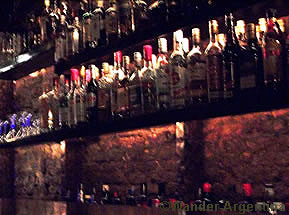 This is a good place to warm up before the night gets going or have your last drink before heading to bed. On the weekdays there’s a two-for-one happy hour from 6-10 pm. Later in the night it tends to be fairly mellow and is a chill place to go for after-dinner drinks. On the weekends it picks up, and can get crowded in the high season, but not uncomfortably so. 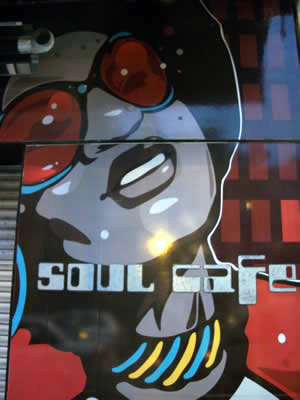 This is a nice place to go for excellent pre-club drinks with a chill retro 70’s vibe and perfect cocktail tunes, although you may want to take a pass on the food (aside from the snacks and desserts — try the ‘James Brownie,’ named after the Godfather of Soul).

The vibe and the music are muy cool —there’s even air-conditioning — but the service leaves something to be desired, especially when the place is packed.

If you’re lucky, or a regular at this place, you may spot some celebrities or catch an impromptu concert by Quintiero himself. 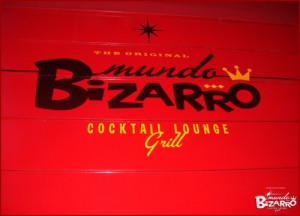 If you’re a rockabilly who has found yourself in Buenos Aires you’ll want to head to Palermo bar, Mundo Bizzaro. Since 1997 Mundo Bizarro has been Palermo Viejo’s one and only effortlessly cool rockabilly bar. It’s also renowned for its excellent martinis and cosmopolitans. The two best things about this bar are the music — we heard everything from psychobilly to trip hop — and the cool, low-lit ambiance featuring constantly changing original art, comfy booths, air-conditioning and an international crowd.

Mundo Bizarro is essentially a place to grab a drink with friends, but there is Americana food is on the menu – the hamburgers and shish kabab aren’t bad, if a little pricey. I

f you’re adventurous, on Monday nights they have good deals on sushi. The table service can come with a serving of attitude but they seem to warm up as the night goes on or after repeated visits. Best to check it out during the early evening on weekdays when it has a more neighborhood feel. Be forewarned: people seem to love or hate this place.

Secreted away downtown, after-office bar Le Merval tends to become an instant favorite for those who discover it.  Due to its location on Viamonte street, which is central but not in the thick of the bar action on Reconquista, it doesn’t receive much passerby traffic as nearby watering holes.  It is tucked away in a little plaza, which means there is outdoor seating when the weather is nice.

Le Merval has the usual happy hour specials, but what sets it apart is its ‘stock market’ price list. It’s a concept that originated in Belgium, spread to other countries around the world, and has been introduced to Buenos Aires exclusively by Le Merval.

The idea is that you have a constantly changing price list, which fluctuates depending on what drink people are buying. Three plasma screens display the current prices and are refreshed every six minutes.  For example, if a group of people decide to all buy shots of tequila, the next time the board refreshes, tequila prices will probably have gone up, while other drinks in the ‘shooters’ category will have dropped in price.

The game can be a little annoying for the kind of person who likes to stick to the same drink all night, because you are never sure how much the next round is going to cost, but for those who don’t mind trying a few different drinks, it can be a lot of fun, and also is a way to save money if you play the game well.

Needless to say, drink prices at Le Merval can vary quite considerably. A bottle of beer can double in price in minutes, so it pays to keep one eye on the screen.  Aside from this fun gimmick, Le Merval has all the things you need from a good bar: friendly, skilled bartenders, a wide range of drinks, and a resident mix-master, DJ Lucky on weekends.

Le Merval is owned and run by three Frenchman; Stephan Gouyer, Adrián Bonachera y Frederic Dath, who ensure the atmosphere is always cosmopolitan and congenial. With a large following of regular customers with both French and American backgrounds, some nights you may for a moment think you are in Paris or New York, especially if you have already consumed a number of the nicely mixed Mojitos on offer.

Nightly themes include ‘Gay After Office’ on Thursdays and ‘Ladies Night’ on Wednesdays. Le Merval also specializes in hosting birthdays and other parties, which can be pre-arranged with the owners.

•Hours:  Weekdays 4pm-1am, Weekends 7pm-morning (both can vary)
•Cash only