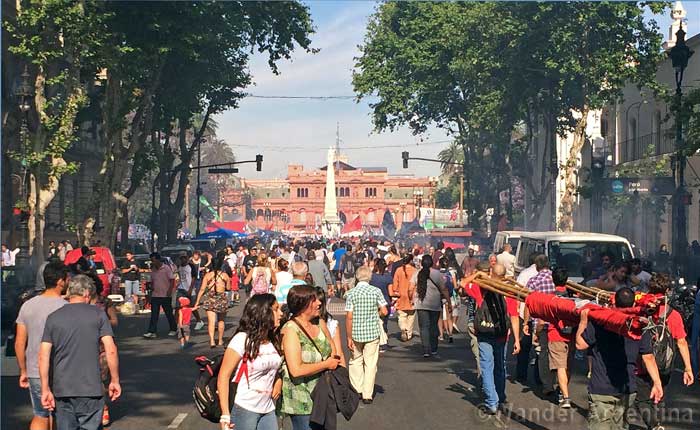 Cristina Fernández de Kirchner supporter’s head to the Plaza de Mayo at mid-afternoon in anticipation of her last presidential address and informal address to the crowd from the Casa Rosada.

As the plaza began to fill with tens of thousands of people all afternoon, the president inaugurated the bust of former president Néstor Kirchner in the Casa Rosada tradition.

In her final address after eight years in office, Kirchner highlighted the improved economy since her husband Néstor Kirchner took office in 2003, her social programs and state recuperation of companies that had previously been privatized. She also referenced recent terrorist events around the world, noting the relative safety of the country. At one point her young grandson yelled out ‘te amo‘ (I love you) from the front row, at which point Kirchner interrupted to explain it was her grandson and said, “I love you too, Néstor Iván.”

She thanked Bolivian president, Evo Morales who was in attendance, her sister-in-law, Alicia Kirchner and other political allies in addition to human rights organizations such as the Madres de la Plaza.

Supporters in the plaza proved they aren’t going to let the change of government happen quietly, with protests and blockades planned for the next two days.