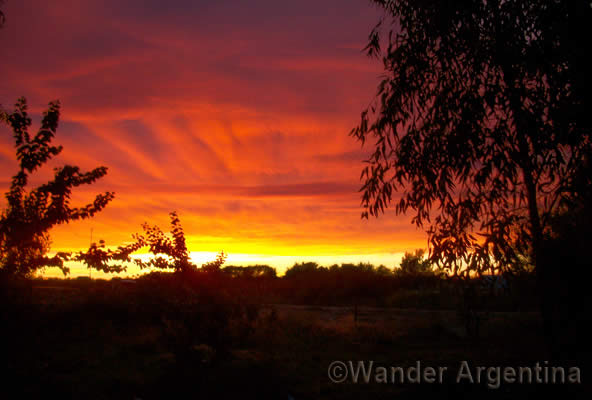 The sun rises on 2013 in Patagonia, Argentina.

2012 was a eventful year for Argentina.

The country expropriated and renationalized its gas company, YPF, scaring off many international investors.

Early in 2012 the state of public transportation was in the news after 51 people died and several hundred were injured in a train accident at Once station in Buenos Aires. It was also the 30th anniversary of the Malvinas/Falklands war. The fate of the islands was still very much in the news, and commentary overshadowed Argentina’s participation in the London Olympic games. At the games, Argentina won four medals, including a gold for men’s taekwondo and a silver won by the women’s national field hockey team.

Payment for public transportation in Buenos Aires was modernized with the subte smart card as the national and city government squabbled practically all year about who would take charge of the floundering subway system.

This year also saw the largest protests in the nation since the 2001 economic crisis, as hundreds of thousands of citizens took to the streets in cities across the country to complain about high interest, crime, and corruption.

Trade unions groups General Confederation of Labor (CTA) and (Argentine Workers’ Central Union) CTG also caused plenty of disruption with protests for a variety of complaints. End of the year looting in five Argentine cities is speculated to have connections to the groups.

Protests also took place against large scale mining projects in various parts of the country such as the provinces of Chubut and La Rioja this year and against biotech company Monsanto as they expand operations in the country.

In some of the strangest Argentina news of the year, private debt investors, NML Capital, tried unsuccessfully to seize the presidential airplane, the Tango 01, but later succeeded in detaining an Argentine naval vessel in Ghana on their behalf.

In a bit of lucky news Argentina was able to put off possibly defaulting on its debt at the end of the year after a U.S. court ruled in its favor in the case involving the so-called ‘vulture funds.’

If 2012 is any indication, 2013 promises to be anything but a boring year for Argentina.