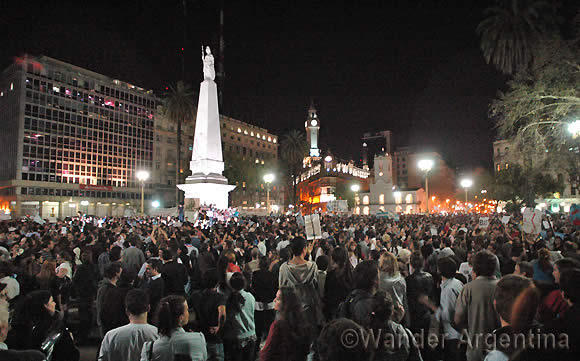 Argentineans continue to protest government corruption, rising crime and soaring inflation in South America’s second largest democracy. Yesterday hundreds of thousands protested all over the country, including in the cities of Buenos Aires, Mendoza, Rosario and Sante Fe.

Aside from a university student punching a reporter on live TV, the protests were peaceful. Smaller protests also took place outside Argentinean embassies in Spain, New York, Miami and other global cities.

Those who support the administration of Cristina Fernández de Kirchner (about one third of the public according to polling firm, Management & Fitsay) say the protestors are being manipulated by right-wing factions and media companies such as Grupo Clarín, who have been given a December 7th deadline to conform to a media law that aims to limit monopolies.