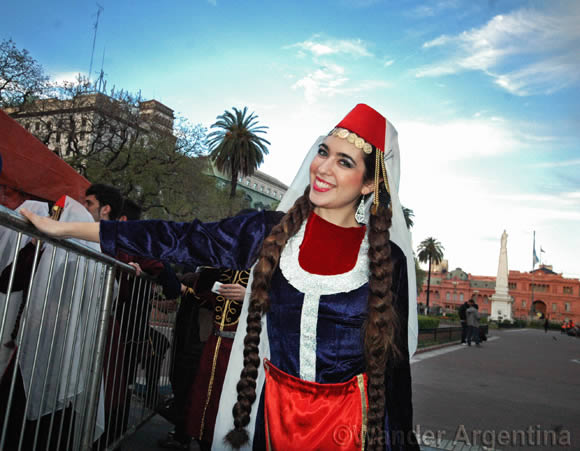 An Armenian-Argentine woman from the dance troupe, Masis, prepares to go on stage at the Buenos Aires Celebrates Armenia Festival.

With an estimated 120,000, Buenos Aires is home to the largest population of Armenian descendents in all of South America. Armenians began in arriving in Argentina during the First World War after escaping the  genocide of Armenians during the Ottoman Empire.

Today the community has nine churches, several schools and publications in Buenos Aires. One of visitors’ favorite milongas (tango dance party), La Viruta takes place in the Armenian Cultural Center. Sarkis, a wildly successful Armenian restaurant in Palermo is a favorite for those who’ve OD’ed on the Argentine culinary staples of pasta and parilla.

The festival was part of ‘Buenos Aires Celebra,’ event series, hosting cultural festivals to celebrate Buenos Aires various immigrant communities. They take place at the beginning of Ave. de Mayo, by the plaza, and run from May through November every year.