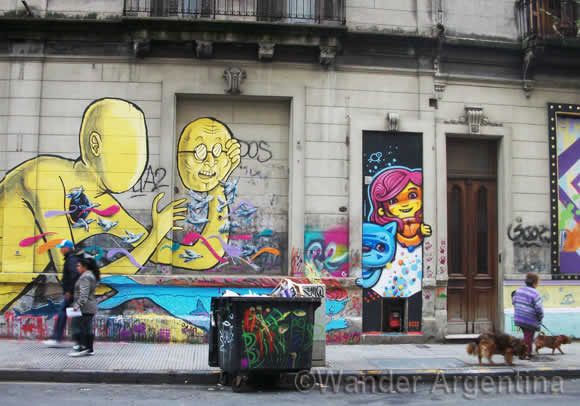 Buenos Aires’ San Telmo neighborhood is unique for its sheer quantity of impressive — but often decrepit —  old buildings and also the abundance of high-quality, colorful street art — often found on the exterior of those buildings.

The corner of Tacuarí and Estados Unidos Streets is a good block to see turn-of-the-20th-century San Telmo architecture and postmillennial street art collide.

The street was painted with permission of shop and home owners in an event organized by Street Arte BA.

This section features a piece called ‘Face Off’ by artists known as BlaBla Buto and Clavahead. To the right is a work called ‘Peekaboo’ by Animalito Land. The pieces are on a building that dates to the 1880’s, built long before aerosol spray paint was invented.