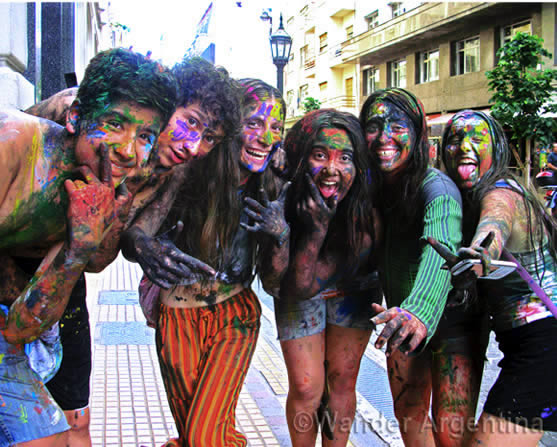 Students from the National School of Buenos Aires (Colegio Nacional de Buenos Aires) in Monserrat celebrate the end of the last day of school. The wild party included music, paint throwing, dancing on scaffolding, first kisses, drinking, and vomiting in front of the school — with no teachers or parents in sight.

CNBA, as it’s known by its Spanish acronym, dates to 1661 and is one of the most prestigious high schools in the country. The competitive public high school provides courses in Latin, Greek and offers a wide range of athletics including yoga, martial arts and sailing, in addition to more traditional sports. The school’s alumni include many former presidents such as Carlos Pelligrini, Marcelo Torcuato de Alvear, Agustin P. Justo, Roque Sáenz Peña and modern-day politicians such as Economic Minister, Axel Kicillof and Cecilia Nahón, the Argentine ambassador to the United States.