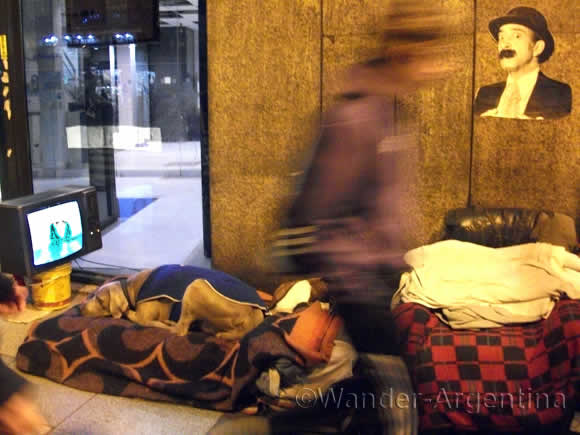 The number of people who live in Buenos Aires’ streets is surprisingly low for a city of its size. Due to government housing programs and growing villas — slums with provisional housing — there are less than 20,000 people turned out on Buenos Aires’ sidewalks.

Los Angeles, California, a U.S. city of similar size, has 48,000 homeless residents according to the 2009 census.

On the high profile corner of Scalabrini Ortiz and Santa Fe in the Palermo neighborhood, lives Alejandro ‘Pechito’ Ferreiro, a homeless man who has his own little living room complete with a mattress, lounge chair, and a working TV with cable, run by electricity taken from the bank next door. He has lived there for 11 years with his two dogs,  Alberto ‘Pechi’ Cortés and Nino Bravo Pechin.