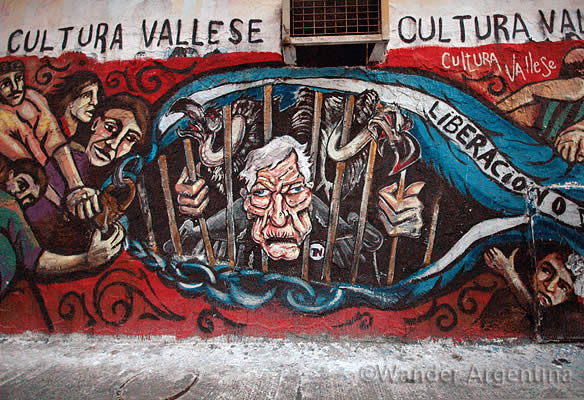 Political graffiti near the Argentine Congress depicts a mean-looking Thomas P. Griesa surrounded by vultures. The 83 year-old U.S. judge has become a popular enemy in Argentina, where the government has accused him of colluding with the so-called vulture funds to bring the country to default.

President Kirchner posted on her website this week that Griesa is leading a “permanent speculative attack'” against Argentina. The comments were in response to a decision by American Airlines to restrict advanced ticket purchases in Argentina to 90-days in an effort to protect themselves from the plunging peso. The government also threatened to adopt ‘sever measures’ against interim U.S. ambassador Kevin Sullivan after he said, “it is important that Argentina get out of default” in an interview with national newspaper, Clarín. The president later called the comment, ‘very inappropriate’ on her webpage.

Leftist political graffiti on current issues is only a small part of the Buenos Aires graffiti scene. Check out our graffiti tour to learn about all types of street art in Buenos Aires.