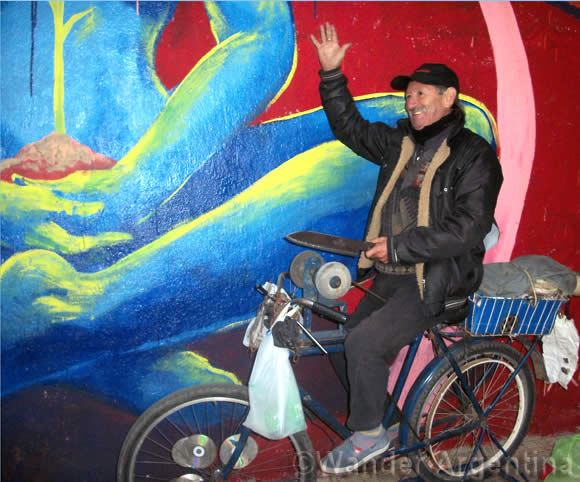 Angel Moriera is not a knife murderer on bike, but an afilador, or knife sharpener. As in some other parts of Latin America, afiladors ride along on their bicycle playing a little pan flute to announce their services. Once stationary, a cylindrical grinding stone is hooked up to the bike pedals so that Moriera can quickly and perfectly sharpen knives, scissors and other cutting instruments.

Moriera lives in Buenos Aires province but has worked around the neighborhoods of Monserrat, La Boca and San Telmo for decades.

Although his profession is dying, on this day he found work for one of the city’s Bar Notables, El Colonial, an over 80-year-old bar on Belgrano and Peru in Monserrat. Moriera is seen working in front of the courtyard’s new yogi-style lotus mural that’s more in keeping with its shiny new neighbor, Starbucks, than the old Gauchito Gil mural that stood there for ten years.