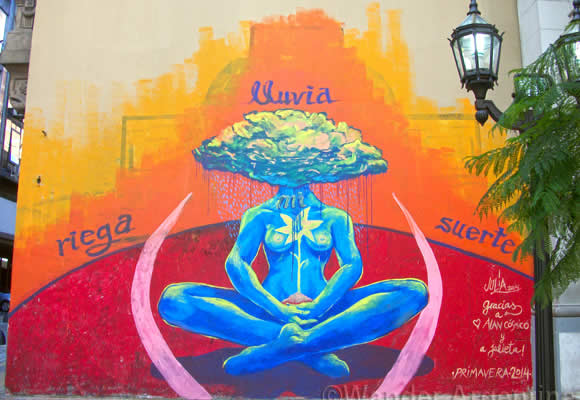 A mural at Belgrano and Peru streets in the Monserrat neighborhood reflects the constantly changing state of street art in Buenos Aires.

The more gentrification-friendly mural of a body in lotus pose with a mushroom head replaced one of Gauchito Gil by Louis D’anjou, aka Grolou, who donated the mural before leaving the country in 2009.  The French artist garnered enough respect in the neighborhood that his mural remained unblemished for five years, although ultimately it did not have the same protection under the law of Buenos Aires as the old Heladera Polaris advertisement above this wall.

Since D’anjou painted the mural of Argentina’s working class saint, the surrounding area has gentrified significantly with a Starbucks and pharmacy chain, Farmacity, opening on the same corner.

To see the city’s best street art and hear the back story on how Buenos Aires became Latin America’s street art capital, check out our graffiti walking tours.