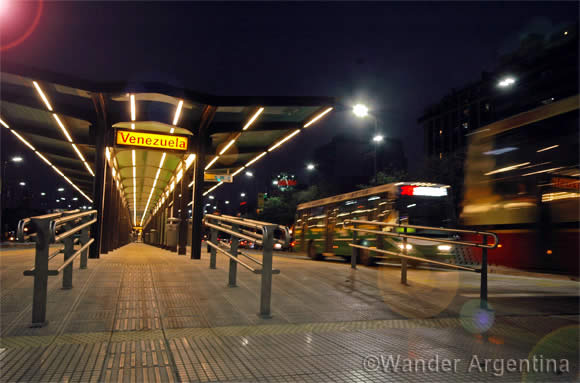 A new Metrobus station on 9 de Julio Avenue, the week of its debut.

The new section of the Metrobus allows for bus-only rapid transit lanes on 9 de Julio Avenue, and diverts buses that previously ran down the narrow streets of San Telmo, Monserrat and Microcentro. The 3 km route is traveled by a quarter of a million people per day. The bus-only lanes cut travel time in half.

The 17 new stops along 9 de Julio feature seating, protection from the elements, are wheelchair accessible, have signage in braille and free wifi. The Metrobus is part of a larger plan to improve transit in the city with the expansions of subte (Buenos Aires subway), the Sube smart card, and the city’s bike-sharing program.