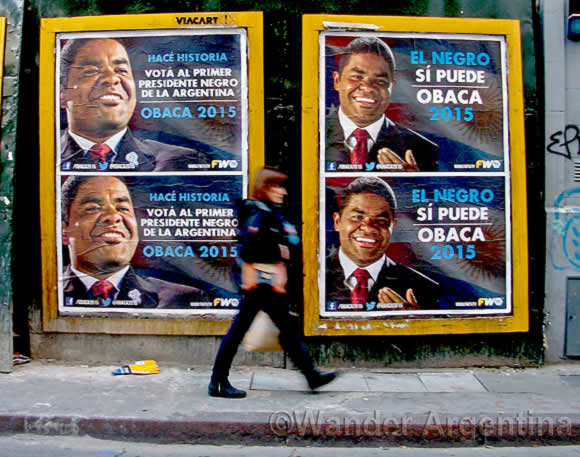 For football fans, Obaca promises to enact legislation that Argentine footballers have to play for Argentine clubs for a minimum of one year. Obaca lampoons currency controls, pledging to provide US dollars for those who deposit pesos in the bank. He’d also up the permitted negative balance on the Sube transit smart card from the current 7 pesos to 100. Oh, and he’ll also share his Netflix password with anyone who votes for him.

While he doesn’t resemble Barack Obama much, finding someone who does is a tall order in a country with only a few thousand Afro-Argentines. Obaca’s satire of Argentine politics runs deep and hits some low points in the collective consciousness of the country, even poking fun at Fernando de la Rúa’s “They say I’m boring” 1999 Presidential ad. De la Rúa is the president who famously bailed on his office, escaping by helicopter from the Casa Rosada. Surely Obaca couldn’t be much more ridiculous than that.

Behind the stinging presidential campaign parody is Nah Productions, a company hired to plug FWTV, a web TV outlet.