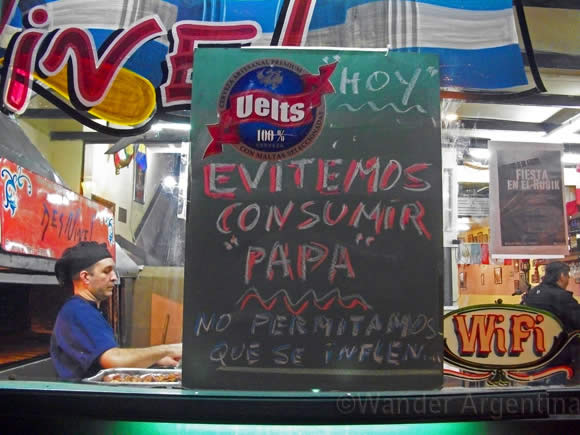 Potatoes have become the latest symbol of Argentina’s inflation. In the last month, the price of potatoes rose 200-300% throughout the country. The popular parilla (grillhouse), Des Nivel in the San Telmo neighborhood, placed a sign in the window informing clients that they are boycotting potatoes, their most popular side dish.

The ‘No a la papa‘ boycott began in the Argentine province of Tucumán a week ago.

The price of papas negras, unwashed white potatoes, is now 8 to 10 pesos per kilo in Buenos Aires. Farmers say rains and frost caused a poor winter harvest. A kilo of white potatoes in the United states costs U.S.$1.21 — one third the cost of in Argentina. In England one kilo of potatoes costs, £.50, or 3.68 pesos. Even in Australia, a country known for its high food prices, a kilo of potatoes goes for the equivalent of seven Argentine pesos.

The price of potatoes is expected to creep upward in the coming months before lowering again with November’s harvest.