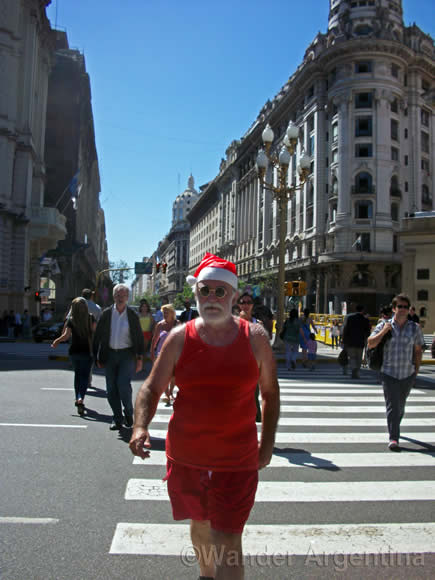 Santa Claus was spotted in a summery getup of red shorts and a sleeveless shirt in the streets of Buenos Aires this week.

Papá Noel, as he in called in South America, was seen walking toward the Christmas tree in Plaza de Mayo. Although trying to keep a low-profile, he was recognized by children and other pedestrians in the downtown area. “I thought without my normal Santa suit no one would recognize me, plus it’s too hot to wear it,” said Santa.

Jolly Saint Nick said he parked his sleigh and reindeer at the South Pole and is here resting up before heading to China to pick up toys and begin his round the world trip next Tuesday.

“Things are just crazy at the North Pole right now. I just needed some R&R before making my yearly journey.”

While in Argentina, Santa said he’s been trying to lose weight, get a tan, and due to the heat and repeated episodes of children pulling on his beard, he even went to a local barber to have his normally flowing white beard trimmed.

“The little boys and girls of Argentina are very good,” Santa said. “It’s the adults in charge that give me a headache.”

Father Christmas said Argentina’s national government, the Buenos Aires city government, the barras bravas (football hooligans), and the disruptive trade unions, CTA and CTG — and now looters across the country — have all made the naughty list.

“There are some real grinches who need to learn to be kinder and carry the spirit of Christmas throughout the year,” said Saint Nick. “They will only be receiving a lump of coal in their stockings this year. For everyone else in Argentina I say, ‘Ho Ho Ho and Merry Christmas!'”