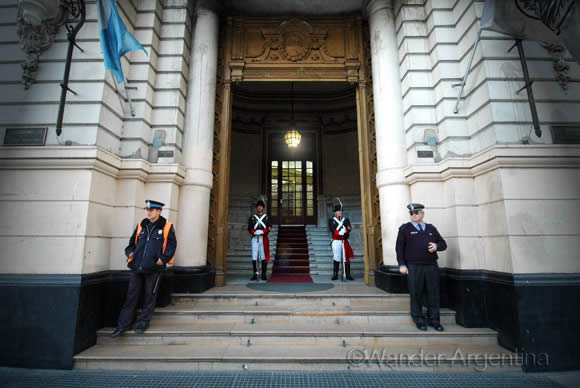 Soldiers from the the 1st Infantry Patricios Regiment guard the Buenos Aires Cabildo. The Regimiento de Patricios is the oldest branch of the Argentine military. The force was formed in 1806 — ten years before Argentina gained independence — to protect the city against British invaders.

The Patricios are considered one of the most prestige arms of the Argentine military, although initially the force was made of up regular volunteer citizens. Among the first Patricios was Manuela Pedraza, a second lieutenant who fought alongside her husband until he was killed by a British soldier. Pedraza then killed the British soldier with her bayonet.

The Cabildo is at the corner of Bolivar and Rivadavia, across from the Casa Rosada. Visitors can see the changing of the guard every hour and also visit the National Museum of the Cabildo and May Revolution inside.