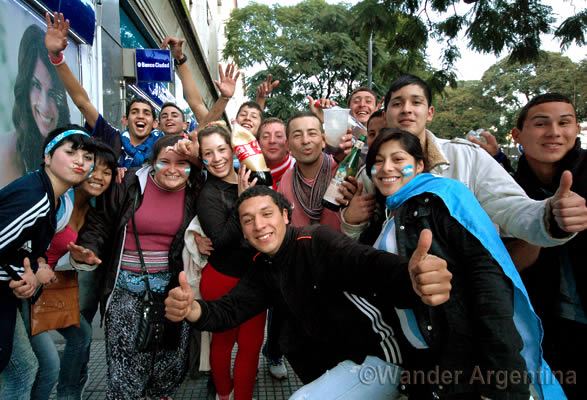 A group of young people head to the Obelisco in Buenos Aires during the first half of the Argentina versus Germany 2014 World Cup Final.

Thousands of people gathered at Plaza San Martin to watch the game on the big screen and later congregated around the Obelisk. The vast majority of the young people, such as the group pictured, were simultaneously jubilant and anxious during the game, but entirely peaceful.

A small group, led by drunken barra bravas (hooligans) later rioted after the devastating loss in overtime to the German team. During a battle that lasted three hours, dozens of shops downtown were destroyed and 120 were arrested. Police were finally able to break up the crowds using rubber bullets, water cannons and tear gas. The national government and city government blamed one another for the violence. National Security Secretary, Sergio Berni added on Radio La Red that the Federal Police had to react with caution because there were babies and small children in the crowd.