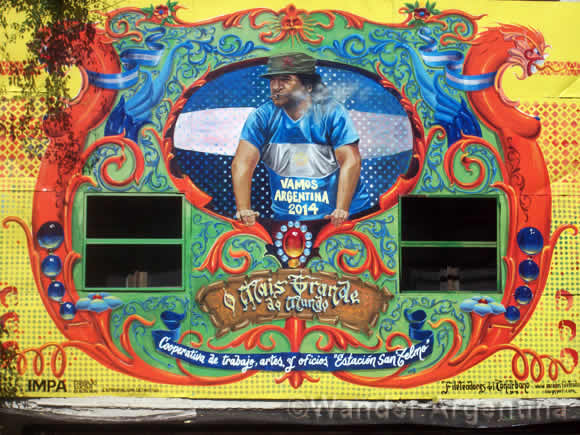 New street art in San Telmo, demonstrates Argentina’s excitement to participate in the 2014 World Cup. The bright billboard, across from La Poesia Café is in the decorative fileteo style unique to Buenos Aires. At the centerpiece of the mural is famed soccer star Diego Maradona, with the words ‘Best in the World’ underneath. Maradona helped Argentina to win one World Cup and played in four, including when he was sent home from the 1994 edition for drug use. Maradona was the coach in the 2010 World Cup, ending in an embarrassing 0-4 loss to Germany in the semifinals.

The aging Argentine icon has made it no secret that he wants to manage the Argentine team in the 2014 Cup and has said the officials from the Argentina Football Association (AFA), who aren’t on board with the idea, ‘understand as much about football as Pakistan.’ In June, the World Cup will be held in Brazil, Argentina’s top rival in soccer.