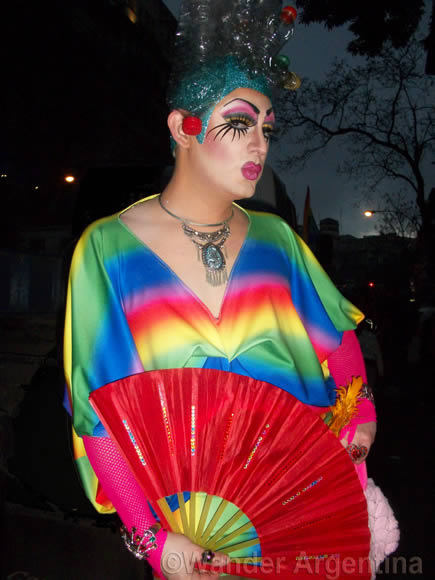 A colorful, yet PG-rated, participant of the 22nd Buenos Aires Gay Pride parade poses for the camera. The motto of this year’s march was ‘Egalitarian Sex Education — Free and Secular.’

Thanks to legislation passed in recent years, Argentina’s gay community enjoys some of the most progressive LGBT laws in the world. Perhaps due to complacency after having gained so many rights in so few years, with gay marriage and a transgendered rights law, or simply because it threatened to rain, there were fewer marchers than in the previous few years, where attendance has reached up to 150,000.

This year’s march was more compartmentalized by political groups than in past years, with the ‘Cámpora Diversa‘ (a division of the pro-government political group founded by President Kirchner’s son) very visible. Among other the groups at the march were ‘Comunidad Católic Gay‘ ‘Putos Peronistas‘ ‘Murgueros por diversidad‘.

Costumes ranged from nothing but colorful body paint, to elaborate impersonations of divas such as Lady Gaga, to full bondage wear. A number of families with children, tourists and some gay-friendly pooches also participated.

As usual, floats, including the always rambunctious moving nightclub from Amerika, inched from Plaza de Mayo up to Congreso before the finale of politically-saturated speeches and a dance-heavy closing shindig in front of the Congreso building.