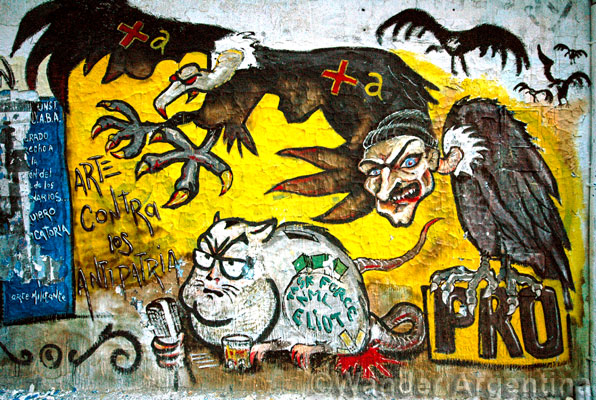 Soon-to-be-vintage political graffiti near the Argentine Congress depicts ‘vultures’ in reference to Argentina’s protracted foreign debt debacle. Argentina recently ended its decade and a half-long battle with foreigner creditors led by Paul E. Singer of NML. Former president Cristina Fernandez de Kirchner battled with the bond holders her whole presidency dubbing them ‘vultures’ and alienating the country from the global credit market. The graffiti is painted by her supporters in the youth group, La Cámpora.

Four months into Mauricio Macri’s presidential term, he has effectively gotten rid of the parallel currency market by allowing the peso to float, causing a corrective default. He also removed public subsidies on energy and transportation in an effort to tackle the fiscal deficit at home.

This week put Argentina back on the world markets with a 16.5bn debt sale that enabled it to pay back the 9.3bn owed to holdout creditors, ending the 15-year long debt saga. In turn, Argentina received an improved rating from Moody’s Investor Services to a B3 stable position from a CAA poor and high-risk standing.

To learn all about Buenos Aires’ street art scene, check out the Buenos Aires Graffiti Tour.