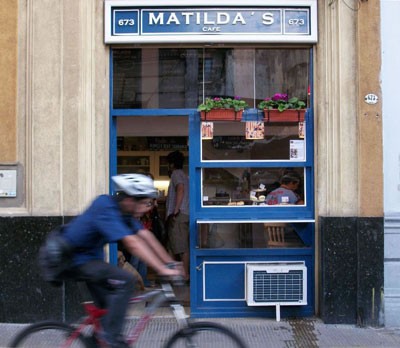 Matilda’s is a precious, Americana-style lunch cafe catering to those looking for a latte and chocolate chip cookie instead of the usual Argentine breakfast of espresso and a sweet croissant.

The homey aromas and colorful cupcakes, muffins and chocolate cake displayed in the window of the tiny storefront seem to magically hook the pedestrians walking along Chile Street. Once drawn inside by the goodies, the American-style decor, with flowered red, white and blue wallpaper and whitewashed wood makes one feels as though they’ve stepped into small-town U.S.A.

Here you’ll find truly frothy lattes, roast beef sandwiches, a variety of bagels (even with the normally hard-to-find lox), flavorful soups served with a chunk of homemade bread, and fresh lunch salads that are gourmet compared to the Buenos Aires’ standard of lettuce, tomatoes and onions.

The prices are reasonable for fresh homemade food — salads go for AR$18, scones for AR$4, and sandwiches and wraps run between AR$12-18.

Argentine owner, Natalie Martino has an established track record on the Buenos Aires restaurant scene. With her British-born husband she already runs two wildly successful businesses; Gibraltar, San Telmo’s most enduring watering hole for foreigners and the Argentines that love them, and Bangalore, a pub and curry house in Palermo.

Matilda’s, named after her beloved Old English sheepdog, is Martino’s first independent venture. Although only open since June 2009, it is already a regular stop for expatriates looking for a taste of home, local office workers on lunch break and globetrotters passing through the ‘Republic of San Telmo.’

Martino and the other Matilda employees must be saints—three to five people can be found behind the tiny counter at any one time, performing a multilingual ballet as they maneuver around each other while preparing orders.

Matilda’s specializes in food to go —there is only enough seating for a small handful of people, but if you’re lucky, grab a spot at the Patagonia-style communal table, where you can linger over the newspaper and a Thai iced coffee. There are also a few stools along a wall counter to perch oneself and strike up a conversation with a random stranger or salivate over the variety of desserts on display.

Buenos Aires’ relatively new trend of coffee-to-go is a bit disappointing if one considers the environmental impact, but one more reason to love Matilda’s is that they give a ten percent discount to visitors who bring their own cup or Tupperware. 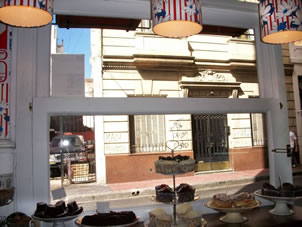