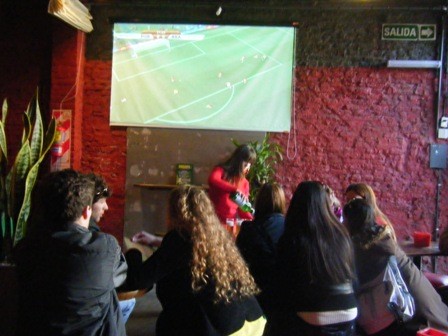 * Editor’s note: In early 2018, after ten years, Sugar is shutting its doors. Check out other bars in Buenos Aires.
Sugar bar in Palermo is a cavern-like expat party spot that doubles as a sports bar. On weekday evenings the bar fills with locals and foreigners alike who are keen to take advantage of the long happy hour, which lasts from 7pm until midnight.

On Thursdays nights, girls pay a modest cover charge for an open bar between 9pm and midnight.

Depending on how the wind blows, any night could turn into a monster party, but your best bets are Thursdays, Fridays and Saturdays during happy hour and later on in the night.

Two big rooms with low seats and cushions encourage intermingling between groups of strangers. Dim red lighting makes everyone appear a bit better looking than they really are, especially after several of the well-priced beverages.

Run by expat Brits and Americans who’ve opened similar locales in Barcelona and Antigua, Sugar caters to ‘foreign tastes’ with a menu that includes bar favorites such as chicken wings and hamburgers, as well as onion rings and a hearty English breakfast for those missing that greasy start to the day that is so hard to find in Argentina. 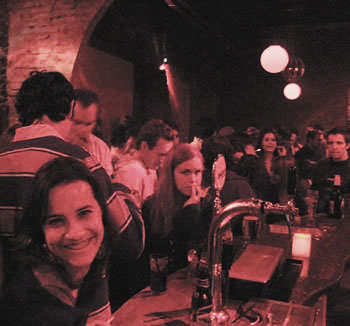 Sugar is also becoming a sports bar to rival The Alamo and Casabar for popularity. Two giant projection screens and an excellent sound system mean the atmosphere is great for big games. Call ahead to check, but Sugar usually puts on important soccer, basketball and rugby matches, and will probably show any other sport you want if you let them know about it in advance.

“Our original idea was to be a party bar,” explains co-owner Keith Lang.  “That’s still our main focus, but the sports thing has kind of taken off as well.”

They have digital pay-per-view, which means most games will have commentary in English. The layout of the back room, with seating against the walls, means your view of the screen can sometimes be blocked if there are a lot of people watching the game. If you come to see a game, arrive early to ensure you get a good spot. — by Dan Colasimone

La Cigale is an energetic, chic French-themed bar in downtown Buenos Aires that is one of the best places in town to party during the week. It’s a fun bar ... Read more