You are here: Home / Archives for budget dining 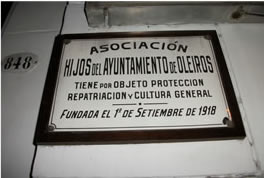 San Telmo’s El Refugio is one of those back-to-basics gems that haven’t yet made it into any guidebook, meaning it remains, as it always has been– traditional, excessively affordable and virtually gringo-free. Those on a budget will want to leave it to the Lonely Planet crowd to spend more at the nearby Des Nivel – here you can get equally good food and friendly service at half the price.

This restaurant, owned and operated by the Association of the Sons of Oleiros (of Galicia Spain) and dating to 1918, is certainly no romantic get-away but it is located in a beautiful classic San Telmo building with leaded glass windows and a tiled entryway. The dining area is stuck in the 1960’s. The tables are covered with the standard yellow and red tablecloths, aging posters of Galicia grace the walls and an old TV in the back provides the only soundtrack (usually a game) in the fluorescently lit salon. 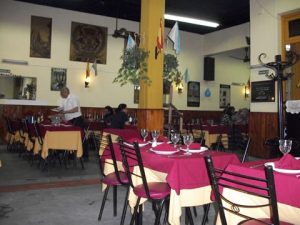 Dismal design-wise, but there’s the rub; although the lighting may make you feel like you’re stuck in school, in Argentina often the places that have the most atrocious lighting and terribly slow waitstaff are the ones with the best food at the lowest prices.

Where else can you have a dinner of a quarter roast chicken and potatoes for AR$15 anymore? Even a plate of Patagonian trout and potatoes goes for AR$26, Galician style cuttlefish marinated in far away spices like sassafras with onions and red peppers will only set you back AR$24. The refuge is a great place to take a break the Argentine Atkins diet; they specialize in Galician-style seafood, paella and shellfish. If they don’t have Galician roots, even your Argentine friends may not be familiar with some of the items on the menu. If you’ve been in Argentina for any length of time, you’ll welcome the chance to try something new.

Even though smoking was banned in Buenos Aires’ restaurants a few years ago, El Refugio is a social club and thus is subject to different zoning laws; smoking is still allowed. If you don’t like the smell of Lucky Strikes while your pallet takes a trip to Galicia, there is a non-smoking section but the two areas aren’t physically divided— luckily the ceilings are very high.

This place is so old-school that in the afternoons groups of old men gather here playing Truco, a popular card game in which one tries to outwit their opponent. 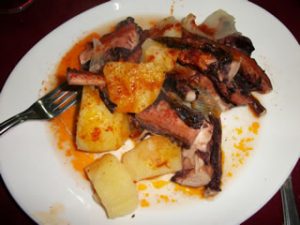