You are here: Home / Archives for competition

The 2011 Buenos Aires World Tango Festival, now in its 11th addition runs from August 16th until August 30th. This year’s festival is a few days shorter in duration than last year’s event but it still packs a tango punch with over 150 live shows, classes, conferences and other activities featuring over 500 national and international artists.

The free festival features tango classes for all levels, documentary films, exhibitions, and an abundance of dance and musical performances by some of Buenos Aires’ best tango ensembles such as Orchestra Tipica El Provenir and tango legends such as Horacio Ferrer, known to habitues of San Telmo’s cafe La Poesia for his work with Astor Piazzolla.

Aside from the country’s best national tango groups, hailing from both traditional and electro-tango genres are international acts such as Uruguay’s La Murguera, Canada’s Quetango and Germany’s Tango Fusion.

The event opens on Tuesday March 16th at The Centro de Exposiciones in Recoleta with a concert by Amelita Baltar and Horacio Molina at 7:00 p.m. followed by a massive  milonga (tango dance party) with music provided by María Nieves and Los Reyes del Tango.

New this year is the addition of the Ribera Theater as a principal venue, which is only appropriate since it is located in the increasingly safe La Boca, the neighborhood that lays claim to fame as the ‘birthplace of tango.’

Also new is a Carlos Gardel exhibition called ‘From Man to Myth’ featuring 500 items and documents that tell the story of one of tango — and Buenos Aires’ —  most important historical figures. The exhibit can be seen from August 17th until the 28th from 4:00 p.m. until 10:00 p.m. BAFICI will be showing a variety of films devoted to tango throughout the festival. 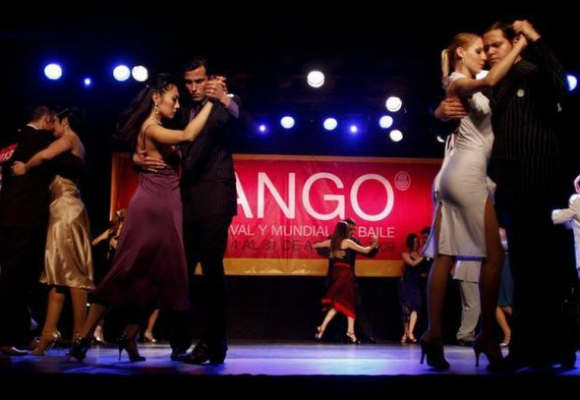 The event’s grand finale is the World Tango Championship, pitting 400 of the world’s best tango dancers against each other in a competition to win worldwide prestige and an AR$20,000 (US$4,800) prize. There are two categories: ‘salon tango,’ the more traditional version of the dance seen in milongas throughout the city and ‘stage tango,’ the flashier ballroom-style tango.

All the activities for the Tango Festival are free, on a first-come first-serve basis. Only the activities taking place at the CCC 25 de Mayo Theater and the dance competition semi-finals and finals at downtown’s Luna Park require obtaining tickets in advance.

-To get tickets for activities at the CCC theater, head to the theater at Av. Triunvirato 4444 between the hours of 11:00 a.m. and 6:00 p.m. Two tickets are given out per person.

-To get tickets for the semi-final and final rounds of the dance competition go to the Casa de Cultura, 525 Ave, de Mayo Monday August 22 between the hours of 11:00 a.m. and 6 p.m. Two tickets per person.