You are here: Home / Archives for destinations 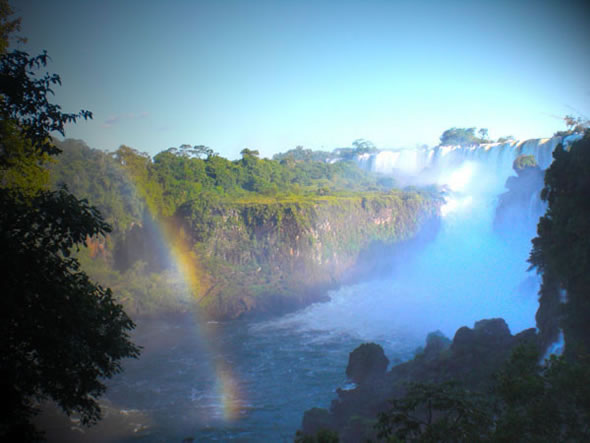 When faced with nature’s brute strength and grandeur at Iguazú Falls, it’s easy to understand why mystical indigenous stories of love and rage serve to explain this phenomenon of nature.

Local legend maintains that this is the spot where a beautiful woman was sacrificed every year in order to tame a vicious snake that inhabited the waters.

One year a brave Guarani man kidnapped the woman in an effort save her life. The snake grew angry and burst, contorting his body and splitting the river to form the waterfalls of Iguazu, forever separating the couple.

Another variation of this local story maintains that a God cut the Iguazú River in half out of fury when he found out his beautiful bride fled with her mortal lover, causing the couple to fall to their death. The gushing waters represent the eternal heartache of the God.

The name Río Iguazú (Iguazú River) or ‘Great Waters,’ was given by the Guaranis who used to roam its banks.

Upper Iguazú drops over 80 meters at the pinnacle of the cataracts, marked by the largest fall, La Garganta del Diablo (The Devil’s Throat), which feeds into Lower Iguazú, collects in a canyon, and then flows into Argentina’s Paraná River.

Iguazu Falls span over 2.7 kilometers of the river’s edge, forming a semi-circle of 275 individual waterfalls with water rushing down at 1,300 m3 per second.

At Iguazú Falls there is a majestic sparkle in the air, as if you’ve stepped into the scene of a Disney-made fairytale.

The sun dances off the water pouring over the fault’s edge, casting rainbows throughout the air and dusting the vivid greenery with a diamond-like shimmer.

There is an elegance about Iguazú Falls that causes jaws to drop and heads to shake in disbelief, leaving no questions about why the UNESCO World Heritage site was named on of the Seven Natural Wonders of the World in 2011. 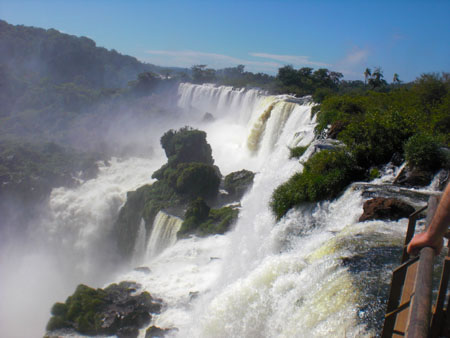 Upon arrival, the surreal beauty of the jungle and waterfalls are masked by the imposing Visitor Center structure where tickets are purchased.

Visitors planning to return for a second day should sure to get the tickets stamped by park rangers on the way out because admission on day two is discounted.

Several languages can be heard along the trails, a testament to the worldwide reputation of one of Argentina’s top tourist attractions.

Get an early start at the national park and try to stay ahead of groups of tourists on guided tours who populate the paths.

While many do hire tour guides, it is not a necessity and they don’t overwhelm the park. Luckily, there are plenty of courses to walk and passing others is as easy as just picking up pace and scooting by.

The Great Adventure Tour, the most daring and longest offering, includes a tour of the Yacaratiá Trail, introducing you to the subtropical climate that is home to 2,000 species of plants, 450 types of birds, 80 mammals and the countless insects that inhabit the forest.

Along this eight kilometer safari ride you may see snakes crossing the trail, Capuchin Monkeys swinging between trees, huge spiders spinning their webs in the branches and Red-Breasted Toucans perched in the treetops.

The bilingual guide points out the edible trees that line the dirt path and explains how hearts of palm are extracted from the numerous Palmetto trees in the jungle.

The 20-minute safari concludes near the water’s edge, where boats wait to traverse the Lower Iguazú River. After a six kilometer cruise showcasing some of the smaller falls, the current picks up and boats are thrown into two kilometers of rapids and a close encounter with the mouth of The Devil’s Throat, a drenching beneath the Dos and Tres Mosqueteros, (Musketeer Falls) and San Martín cascades, and a close view of the San Martín Island, a paradise that sits at the heart of the cataracts. The finale leaves passengers soaked yet awed by the feeling of having faced the fury of the falls. The water quells the heat and one cannot resist the urge to gaze upwards to receive a bath by Mother Nature.

Iguazú Jungle tours offers an assortment of aquatic excursions – the Nautical Adventure, which is the same trip as the Great Adventure tour without the safari ride, the Ecological Tour, which traverses the calm waters of the Upper Iguazú, and a variety of packages that combine the different programs.

Those who prefer to keep their feet on the ground will find plenty of walking trails that provide breathtaking views and the vertigo-inducing sensation of standing on the fault’s edge, where a refreshing mist gives relief from the humidity.

Along these walkways are packs of Coatis, or Brazilian aardvarks, that feed on stray berries and pose along the railings for snap-happy tourists.

The Lower Circuit takes roughly 1 hour and 15 minutes to traverse, hosting 150 meters of stairs, but the face-to-face encounter with five different falls makes up for the effort it takes to arrive.

This is a nice circuit to conquer at the end of the day, once the crowds have dispersed — you may feel as though you are discovering the falls for the first time, especially those such as Dos Hermanas (Two Sisters), tucked away in a quiet crevice complementing the peacefulness of the trail at dusk with their synchronized pitter-patter on the pool below. A diverse mix of walkways and jungle paths make it likely to spot several of the different species of birds resting in treetops, including boomerang-like swifts (the park’s official symbol) parakeets and parrots. Iguanas and lizards also scurry across the trails, but perhaps the most inspired picture comes from the swarms of vibrant butterflies that land on the limbs of passers-by.

The Upper Circuit – This 1200 meter walk, can be complete in roughly 35 minutes, and consists of various lookout points at the peak of several cataracts, starting with Bossetti Fall – named after an explorer who ‘rediscovered’ the falls in the late 1800s – and finishing at the Mbiguá Fall. This course boasts some of the most impressive panoramic views that can be enjoyed from the Argentine side and highlights the vast expanse of the Brazilian border.

All trails throughout the Argentina Park are connected by the Rainforest Ecological Train (Tren Ecológico de la Selva), which facilitates access to each part of the park with three different stops along the way. From Central Station, one can either take the train or walk the Green Trail (Sendero Verde, 20 minutes of a ‘canopied’ walkway through the jungle) to Cataratas Station, which marks the beginning of the Upper Circuit. From here, the train travels deep into the forest, explores different branches of the Upper Iguazú and ends at the Devil’s Throat Station, where the Devil’s Throat Circuit begins.

Allow an hour for the popular Devil’s Throat Circuit because unlike the other paths with several vistas, there is only one balcony area to get a good view of the falls.

Once you reach the Devil’s Throat, the railing is the only thing holding you back from certain death, but this unrestricted access liberates the onlooker and makes the crowd disappear into the background. The thunder of the river breaking over the banks here is hypnotic.

If the Devil’s Throat Fall is the conductor, the neighboring cascades are the orchestra, keeping perfect rhythm with the main event. Adding to the devilish drama are the swarms of turkey vultures menacingly circling overhead, as if waiting for someone to fall to their demise.

There are restaurants, which have pizza and other basics, near the entrance of the park, but expect the usual tourist offerings of overpriced, mediocre food.

There are also fast food options near Central Station and Devil’s Throat Station, useful for the bathroom facilities and places to sit and relax throughout the day.

Packing your own picnic is a healthier and cheaper option. The ultimate dining experience in the park is the once-a-month full moon tour to the Devil’s Throat, which provides a chance for visitors to see the daytime shimmer replaced with serene silver and blues of the falls at night.

Puerto Iguazú and Other Local Attractions

Since visitors are already in Iguazu, most also make the hop over to border the Brazilian side of the national park for a tour to enjoy the panoramic views of the falls.

The area that includes Iguazú Falls, Foz do Iguazú and Ciudad del Este is known as the Hito Tres Fronteras (Three Borders Milestones), which is the point where the limits of Paraguay, Argentina and Brazil come together with these cities.

Ciudad del Este is known as a shopping mecca for Argentines an Brazilians and is also known for a black market goods.

Those with an interest in geology could also visit Wanda Mines an hour to the south. Still, with so much magnificence in close proximity you only really need two or three days to have the full Iguazu experience.

→ Cont. Getting there and Lodging

→ Whether you prefer to travel by bus or airplane, stay in a budget hostel or a fancy hotel, we can design a dream Iguazu trip for you at a price far more reasonable than your travel agent at home → Contact us