You are here: Home / Archives for manual rosas 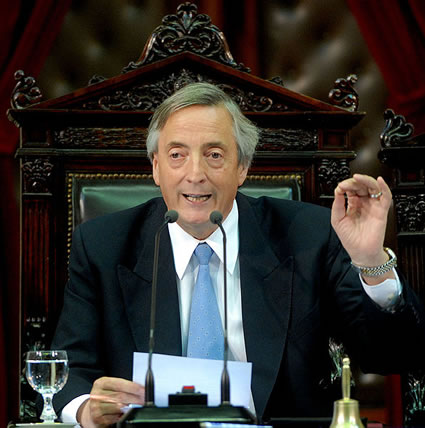 Ex-president,Néstor Kirchner, who passed away October 27, 2010 was the latest in a long line of charismatic and single-minded leaders who have shaped Argentina’s history since independence.

In the ragged history of Argentine politics, he was part of a phenomenon which remains constant amongst all the turmoil -– the figure of the all-powerful leader known as the caudillo.

From Manuel Rosas to Juan Domingo Perón to Néstor Kirchner, these strongmen have used charisma and cunning to lord over the multitudes, crush those who oppose them and reap that which nourishes them— power.

Not unique to Argentina, they have time and again risen across Latin American and — bearing other names — in Italy and Spain too, representing the political embodiment of Latino machismo. Traditionally, the Caudillo is ruthless, popular, brave, reckless but often calculating, unquestionably masculine and usually willing to use violence to achieve his goals— Augustus Caesar, Benito Mussolini, General Franco, Fidel Castro, Hugo Chávez and Mexico’s Antonio López de Santa Anna share many of the characteristics of the Argentine caudillos.

In order for a caudillo to emerge, tinderbox conditions must exist. There has to be a vacuum of power or deep unrest, meaning that somebody with a magnetic personality shouting magical promises is able to ride a wave of popular support, often winning his ruling clout in a short space of time. Political leanings are of secondary importance once a populist personality cult is formed.

History demonstrates that many of these nationalistic leaders display mixed and often contradictory dogmas, ranging from the extreme left to the extreme right.

While caudillos throughout history have had much in common, the role has gradually evolved to fit the political climate of the times in which they lived and ruled. Early editions were little more than barbaric warlords, dependent on a feudal covenant of protection and devotion of their underlings and a strong military force to consolidate their power. Then, in the mid-twentieth century, various dictators throughout the Latin world maintained their command through a combination of military strength, popular support, propaganda and an insidious and tactical elimination of their enemies.

The contemporary equivalent is a more political beast. He doesn’t rely on brutal force such as his predecessors, but a certain ruthlessness remains, as well as a more cunning use of threat, intimidation and manipulation of the media to repress opponents. Often they gain power by democratic means, and then go to extreme measures to maintain it, utilizing propaganda to manufacture an image of wild popularity.

Manual Rosas & the Emergence of the Argentine Caudillos 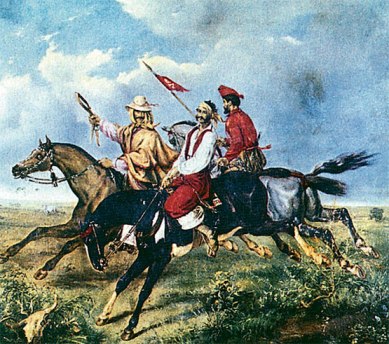 When Buenos Aires declared its independence from the Viceroy in 1810, as a response to the overthrow of King Charles IV in Spain, it set in motion a period of great instability and a disintegration of traditional power bases, especially in the outlying municipalities. Civil war raged, with the central issue of the time being whether to unite the provinces under a federal system (Federalism) or allow them their individual freedoms to govern as they wished (Unitarianism).

Where no central authority existed, large landowners grew in power. They offered work and sanctuary for many men. The age of the wandering gaucho was coming to an end, and many of these fierce nomad cowboys joined the provincial militias of men such as Buenos Aires’ Colonel Manuel Dorrego, Salta’s Martin Güemes, San Juan’s Angel Peñalosa, La Rioja’s Juan Facundo Quiroga and the aforementioned Juan Manuel de Rosas.

Attempts to instill governance in the capital of Buenos Aires largely failed, and when two northern Unitarian caudillos moved their forces south with their eyes on the capital, the most powerful strongman of the time, Rosas, was entrusted to take command of the military of Buenos Aires and a unified force of private armies to confront the advancing threat. He did so with aplomb, and consolidated his power as the popular governor of Buenos Aires.

From there, Rosas went from strength to strength, ruling a more unified Argentina for more than 20 years with dictatorial menace. He provided the template for future caudillos –- the people were blessed with a much more stable country with a strong military to ward off invasions, but paid the price with the loss of many basic freedoms. Rosas ruled through fear, violence and intimidation, backed by his loyal armed forces and secret police, the mazorcas, until he was eventually overthrown and exiled to England in 1852. He died as a farmer in Southampton in 1877.

The regional warlords of the early 1800’s were a precursor to later, modern versions of the caudillo. As Argentina developed a more structured political system, power-seeking strongmen were forced to adjust their strategies. The likes of Justo José de Urquiza and Ricardo López Jordán increased their power through political channels in the mid-19th century, though it was through military might that they first established their credentials, and it was that strength of force that determined their success.

The one time allies eventually became bitter enemies, and while Urquiza ruled the country as president from 1854-60, adopting a national constitution for the first time, López Jordán could never muster an army great enough to overthrow his nemesis, despite numerous attempts.

Even since those heady days, the trend for Argentine leaders to rise up like messiah-like and seize control of the country continues. A vicious cycle of short-sighted leadership fuels the repetition of earlier mistakes. Charismatic leaders emerge riding a wave of popularity by promising near-instant solutions to a myriad of problems. When institutional weakness and lack of foresight ensure that things inevitably go severely array, there is a strong backlash and a new savior emerges, promising to fix all the problems of the last.

Peronism was the most glaring example of this tendency in the twentieth century. Juan Domingo Perón ascended through the ranks of the military ruling party in the 1940’s by aligning himself with the influential trade unions, before eventually winning the presidency with the help of massive support from the poor and disillusioned working class.

Painting himself as the socialist champion of the voiceless and oppressed, he nonetheless relied heavily on military backing to sustain his rule. He also professed a great deal of admiration for fascism and its results in Germany and Italy, which explains his willingness to protect Nazi war criminals in the aftermath the Second World War.

Commodity-rich Argentina enjoyed a period of economic boom after the war, and Perón used this to his advantage. His rule resulted in a great improvement in the quality of life for many Argentines, yet it came with the caveats of tyrannical oppression, fear and financial irresponsibility. In his later years he would not stop at arresting and torturing dissidents, though his most common political weapon was to silence his opponents by snuffing out their forms of expression –- most notably media outlets.

Like other leaders before him, as soon as chinks in Perón’s armor appeared in the form of a financial downturn resulting from isolationist policies, his enemies were prepared to attack the image of the seemingly ‘faultless leader’ and his downfall was swift. What is unusual about Perón, when compared to other caudillos, is that he would rise up again, not once but twice, to lead the country. His re-election revealed not only Perón’s persistence but the population’s willingness to throw themselves at the feet of a figure postulating as an omnipotent redeemer.

Perón’s shadow still heavily looms over the contemporary Argentine political landscape. Peronism remains the strongest political force in the country, and a series of Peronist leaders have come forward to lead the country with little foresight or temperance before being overthrown by often equally oppressive and short-sighted opponents. The military dictatorship of 1976-81 may be viewed as a kind of multi-headed caudillo who ruled by violence and oppression and was a direct reaction to the previous authoritarian president, the unpopular widow of Perón, Isabel.

Carlos Menem, President of Argentina from 1989 until 1999 was in many ways a throwback to the caudillos of old. He first established his power as governor of the La Rioja province, building up a power base there that would serve as his stronghold as he entered federal politics.

A larger-than-life character, he came to power with the newly-democratic nation suffering hyperinflation and a general sense of pessimism. Playing the role of ‘knight in shining armor’ that has bedazzled the country’s citizens before, Menem implemented a series of economic reforms that brought short term prosperity to the country and boosted his popularity. The most notable among these reforms was his decision to peg the Argentine peso to the America dollar one-to-one.  This move eventually proved absolutely disastrous to the economy, resulting in the massive financial crisis of late 2001, which left millions jobless and subsisting below the poverty line.

The emergence of Néstor Kirchner, from provincial strongman in Patagonia to President of the nation in 2003, is the latest evidence that the modern-day caudillo still has an important place in Argentine politics.

Kirchner showed all the hallmarks — early popularity based on perceived patronage of the lower classes, promises to restore the nation’s stability, suppression of opponents through manipulation and control of the media and a seemingly endless desire to increase his personal wealth and power. Very much a modern, albeit softer, incarnation of the traditional caudillo, he was a blend of the political and the robust.

Maneuvers like stepping aside at the last election to allow his wife, Cristina Kirchner, to run for a presidential term in order to avoid accusations of megalomania show that he was a wily operator, while close association with protest leaders such as Luis D’Elia, who threaten opponents with physical violence, draw a darker connection to his violent forebears.

It’s no coincidence that the men who were his closest allies on the continent, Hugo Chávez of Venezuela and, to a lesser extent, Bolivia’s Evo Morales are men who also fit the mold of the typical Latin American populist leader.

Now that Nestór Kirchner — who planned to run for presidency in the 2011 election — is deceased it remains to be seen if Argentina will persist with its mercurial love-hate relationship with these arcane figures of power and passion. For now, Kirchner’s untimely death leaves a large power vacuum in the perpetually volatile Argentine political landscape.

→ Video: Hundreds of thousands rallied along Avenida de Mayo while waiting to view the casket of Nestór Kirchner in the days after his death