You are here: Home / Archives for obelisco 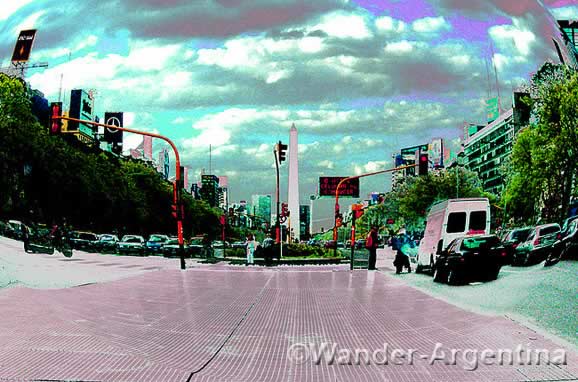 A wide angle view of Buenos Aires’ most prominent monument, El Obelisco and its most famous thoroughfare, 9 de Julio, a nine lane, 140 meter wide avenue which Argentines claim is the widest avenue in the world, although that is debatable.

Buenos Aires’ most famous monument, El Obelisco (The Obelisk) extends out from the city’s midriff like a giant pencil – standing proudly erect as the unofficial center, symbol and rallying point of this sprawling metropolis.

Since its construction in 1936, it has suffered its fair share of figurative ups and downs, yet has remained a durable reference point for Argentines.

It may seem like a fairly uncomplicated piece of architecture which shouts out a nation’s eagerness to embrace its own virility, but on closer inspection, the Obelisk communicates a number of different subtexts.

It was designed by Alberto Prebisch, a celebrated Tucuman modernist architect of German parentage, to commemorate Buenos Aires’ 400th anniversary.

Made from Cordoba white stone and thrust up in just 31 days, the four sides of the 220-foot shaft each represent defining moments in the history of Buenos Aires: the founding of the city in 1536, its second and definitive foundation in 1580, the inaugural raising of the Argentinian flag in the city in 1812, and the declaration of Buenos Aires as the nation’s capital in 1880.

A fence has surrounded the base of the structure since 1987, but you can still get close enough to observe the inscriptions at the base of the monument which reference these momentous events.

The Monumental Epicenter of Buenos Aires

The site of The Obelisk could not be more adequate. It is the exact spot where the San Nicolas church once stood – the church which gave its name to the downtown neighborhood commonly known as microcentro, and the place where the sky blue and white flag with its happy sun face  🇦🇷 was raised for the first time in 1812.

Nowadays it intersects two of the most important streets in the city — the long entertainment hub of Corrientes, and the ‘widest avenue in the world’ and traffic artery, 9 de Julio.

Millions of subterranean commuters scuttle under El Obelisco every day, since many of the city’s subway lines converge and connect at the 9 de Julio subway station, which lies beneath the Plaza de la Republica, where the monument stands.

The Obelisk is also the powerfully magnetic rallying point for all kinds of public gatherings. Religious congregations, political demonstrations, candlelight vigils and concerts held at the Obelisk have been known to attract thousands of devotees.

Celebrations of sporting success such as important victories for the national soccer team (or failure, as seen in this video), often take place Pagan-like before the mighty icon, with much drinking and dancing and general merriment.

National team coach, and chubby little man Diego Maradona even threatened to run around the giant pillar buck naked should his team win the 2010 World Cup. Fortunately, they didn’t, and the world was spared the sight of his much smaller version.

The festivities for Argentina’s bicentennial commemorations in 2011 centered around its pearly facade and it was visited by thousands in celebration after Argentina’s 2010 legalization of gay marriage.

Unfortunately, the public is not allowed access to the small entrance door and 206 steps which lead to the four windows at its peak, meaning we can only imagine the spectacular view that it must offer.

A Canvas for Activism

As such a stark emblem of Argentina, the Obelisk has always been used as a canvas for groups wishing to publicize their beliefs. During the presidency of Isabel Martinez de Peron in the 1970s, a menacing sign appeared at the top reading, ‘Silence is Health’. Ostensibly this was a simple traffic tip against unnecessary honking, but many interpreted it to be a much more sinister message aimed at the government’s critics.

Various graffiti attacks over the years culminated in an activist group pouring paint from the top windows in the 1980s, leading to the raising of the fence around it and public closure.

In 2005, the Obelisk was famously covered in a gigantic pink condom to commemorate World Aids Day and in 2006 it was transformed into a pencil to pay tribute to those students who were kidnapped and murdered on the ‘Night of the Pencils’ 30 years earlier.

Comparisons are often made between Argentina’s Obelisk and the Washington Monument. Egyptians and Parisians no doubt find similarities with their own, earlier versions as well. There is little doubt that Prebisch’s design was heavily influenced by one or all of the above, but to Argentinians, it’s a moot point.

Their own great erection may be about half the size of its North American equivalent, but as a wise man once said, “It’s not the size of the wand, but the magic it weaves.” El Obelisco has pierced its way into the hearts of Argentine people, and remains the most potent symbol of the nation’s capital.

→ Visitors can see the Obelisco while taking our popular city tour with a Buenos Aires transportation primer. Or visit in on a Buenos Aires City Tour, available in six languages. Wheelchair users will want to book the Fully-Accessible Buenos Aires Private City Tour.

→ Read about how the Obelisk is haunted in Haunted Buenos Aires

Hotels near the Obelisco

There are a lot of three and four-star hotels close by the Buenos Aires Obelisco. While most visitors prefer Palermo, Recoleta or San Telmo, the Obelisk marks the center of the city making it convenient location-wise, and many international guests stay in this area.

If staying in this area, visitors are urged to learn about some of the common Buenos Aires robbery tactics near tourist attractions.

• Broadway Hotel & Suites is a four-star option steps from the Obelisco that offers a good value. Prices start at about $60 a night (if getting the superior ‘Dolar Blue‘ exchange rate).

Hotel Uom Buenos Aires is further afield, but highly rated by guests, with standard hotel rooms for under $100 a night.

• Art Deco Hotel could use a revamp, but with rooms starting at about $25, the price can’t be beat.