You are here: Home / Archives for transportation from Buenos Aires to tigre 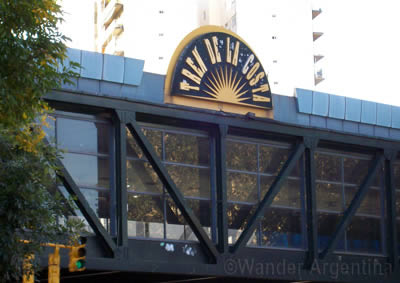 There are two trains, a couple of buses and a commuter boat that go to Tigre from Buenos Aires.

The most economical way to get to Tigre from Buenos Aires is via the Linea Mitre train. This train begins at Retiro station.

This line has a new viaduct which has cut travel time between Retiro and Tigre from almost an hour to about 40 minutes. There are several branches of the Mitre line — make sure that you take the line that has ‘Tigre’ station as it’s ultimate stop.

Those staying in the northern areas of the city can also board at a later stop such as Lisandro de la Torre or Belgrano C.

Tickets cost roughly AR$18.50 with a Sube card and AR$37 without. Trains leave every 10 minutes on weekdays, every 20 minutes on weekends and the journey takes about an hour.

For those who want to travel in style, the Tren de La Costa (Coastal Train) takes tourists to various stops along the river.

Revamped as a tourist attraction in 1995, this train offers picturesque Delta views and stops at 11 train stations, many refurbished, along the way.

One type of ticket takes you straight to your destination while another allows you to get on and off the train as you please.

To ride the Tren de la Costa, take the Mitre train described above from Retiro via the Mitre line (which has ‘Mitre’ station as the last stop). Once at Mitre station, cross the tracks and head to the Tren de La Costa station.

The standard gauge electric train cabins are climate controlled. The train costs almost exactly eight times more than the very affordable Mitre train outlined above, but it is intended as an half day or day-long excursion in itself.

Some worthwhile stops include Borges Station, named after the writer, and dubbed the ‘Station of the Arts;’ the English-style Barrancas Station; and San Isidro where a small urban center offers leisurely shopping and outdoor pubs and restaurants.

Due to political problems with the train system, the Tren de la Costa is not as exclusive as it once was, with aging upholstery on the seats and graffiti (not the good kind) marring some cars. As tourist use has declined, some locals simply use the Tren de la Costa to get around locally for free – they get away with not paying the fare because the ticket offices along the route are often closed.

It is also possible to take the number 60 bus from various points throughout the city but the journey takes at least an hour and a half, usually more.

Another option for those staying in a northern part of the city such as Palermo or Belgrano is to take the 152 bus to Mitre station where you can catch the Tren de la Costa. This option avoids backtracking to Retiro to take the train.

Monday through Friday it is also possible to take a commuter boat from Dock Four in Puerto Madero to Tigre, but there is only one boat per day, at 6:30 p.m.

The boat is a good Friday evening option if planning to spend the weekend in Tigre. Tickets need to be reserved at least 20 minutes before launch time and riders need to carry an I.D.  SturlaViajes is the company that runs the commuter boat. You can book a $20 round-trip boat ride with them online that includes a hop-on, hop-off bus in Tigre. If you’re having fun in Tigre, there is always the option to ditch the ride back and just hop on the train back to Buenos Aires or stay in the delta overnight and get the boat back the following day.

Getting to Tigre by Bike

One of the most popular longer cycling excursions in Buenos Aires is the trip to Tigre. The bike route goes along the River Plate, and if you get tired you can hop on the train along the way. Since it is an easy, flat ride, most bikers successfully make it to Tigre and return to the city by train.

To get to Tigre by bike, take the bike path along Liberador Avenue heading north to Figueroa Alcorta. The 26 km trip takes about three hours. It’s pretty straight forward but a few twists and turns means it is worthwhile to download the google map before you go.

Another option is to take the slightly longer Super Panamerican Bike lane, but this option doesn’t go along the river, so it’s not as scenic.

• Driving to Tigre from Buenos Aires

To get to Tigre from downtown take General Paz to the Panamericana Highway. Head north until passing over Avelino Rolón and veer onto the ‘Ramal Tigre’ heading northeast. Once you are in Tigre, veer east to reach the city center.