You are here: Home / Archives for castellano 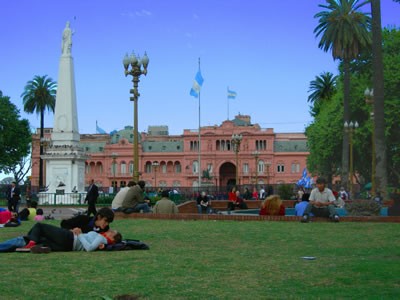 Those who come to Argentina to learn the language will find that its interpretation of the Spanish language is every bit as unique as the country itself. Visitors quickly find out that those textbook Spanish classes can serve as a comfort but not a compass when trying to navigate this country’s Italian-flavored version of Spanish.

Another unique feature of Argentine Spanish is the pronunciation of the ‘ll’ and ‘y’. Instead of adopting a ‘y’ sound as in the word ‘yonder,’ the ll and y take on a rougher sound that can be likened to the zh in “casual” or “leisure.”  This can make the pronunciation of some words identical to each other — if someone says ‘se cayó’ (it/he/she fell) you will have to extract from the context the meaning because ‘se calló’ (it/he/she got quiet) is pronounced exactly the same way.

This phonetic difference may take some getting used to, but it shouldn’t hinder communication. Travelers who speak a more standard Spanish will be understood perfectly well, but it’s good to keep these changes in mind.

Another unique feature of Argentine Spanish is the use of the Voseo. Instead of ‘tú,’ as the second person singular pronoun (the informal form of the word ‘you,’) ‘vos’ is used. Using the vos form may take a bit of practice, but once you figure out how it works the construction is rather simple and you might even find some verbs easier to conjugate.

When ‘tú’ is used the conjugation of irregular verbs requires a stem change in the second person form. With ‘vos,’ however, no stem change is necessary because the stress or emphasis is on the last syllable (i.e. tienes becomes tenés, hablas becomes hablás, and in the imperative form, ven becomes vení, piensa becomes pensá).

Argentines do not tend to use singular, formal ‘you’ Usted, as frequently as in many other Latin American countries though, reserving it mostly for business situations, addressing the elderly, and sometimes to jokingly give deference to a friend.

Throughout much of the country Argentina Castellano adopts a very informal style heavily peppered with lunfardo, the local slang, particularly in Buenos Aires. The daily vernacular used by Argentine teenagers would probably land kids in big trouble in most other Latin American countries.