You are here: Home / Transfer Money

The Blue (Dollar) is the new Black

Pay attention travelers — Argentina’s ‘Blue Dollar‘ is back! This is the most important thing for budget conscious travelers to Argentina to be informed about. If you don’t know about the ‘Dólar Blue‘ read on because it can make a huge difference in how much you end up spending on your vacation to Argentina.

‘Blue Dollar’ is an euphemism for the black market exchange for US dollars. ‘Blue Dollar’ sounds friendlier and highlights the reality that the government’s own policies create this black market.

Argentina has a tumultuous banking history and beginning in late 2019 the country’s unorthodox currency restrictions (which most recently existed from 2012-2015) are back.

The restrictions place limits on the amount of foriegn currency locals can buy, creating a parallel market for foreign currency. Additionally, because of the inflationary nature of the Argentine peso, locals prefer to buy and save in foreign currency so that their money doesn’t lose value sitting in the bank.

In what is being rebranded as the ‘tourist dollar,’ they will also pay a 30% surcharge on anything paid with an Argentine credit card abroad. (Those making credit card purchases in Argentina with foreign cards also pay the fee, more about that below). The restrictions create a huge underground demand for foreign currency, since locals have no way to get a their hands on any reasonable amount of foreign currency through official channels.

For travelers to Argentina this means that USD, Euros or Reals are worth significantly more cash-in-hand in Argentina than the official government rate given out at banks and ATM bank machines.

Exchanging currency on the black market is a legal grey area — it’s somewhat of a necessity for Argentine citizens and hugely beneficial for foreigners.

But, travelers should be aware that USD, Euros and Brazilian Reales are the only three currencies in demand on the black market.

Those planning to visit Argentina who want to exchange money on the black market will probably find it easiest to do so around the country with U.S. dollars.

-Visitors, just like Argentines, will not be able to get their hands on any foreign currency in Argentina, even from their own bank accounts back home. Banks and ATM’s will only remit Argentine pesos.

In practice all this means Argentina is going back to being an cash-only economy for foreigners, because who wants to pay a third more just for using a credit or debit card?

Those who travel to Argentina with foreign cash (USD, EUROS, REALS) can exchange it on the black market and receive considerably more than at a bank or ATM.

As of September 2020, foreign currency is worth 52% more on the black market and this number is only expected to go up as the government increases currency controls.

Argentina lifted the dollar restrictions and returned to relative normalcy on the banking scene between the years of 2015 until late 2019, when the neoliberal administration of Mauricio Macri was in power. During these years, there still existed a small black market for currency but the spread between the official rate and the black market rate was negligible compared to now.

One of the first moves of the newly elected Peronist government return to power in late 2019, was to reinstate currency restrictions, bringing the country is back to the ‘blue dollar‘. 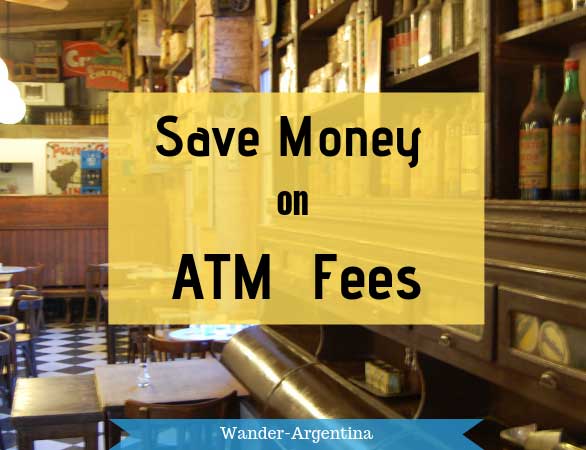 How to Save Money on ATM Fees in Argentina

With the return of the Blue dollar, budget conscience travelers to Argentina should try not use ATM’s at all.  On top of once again getting a poor official rate for foreign currency, ‘Low Withdrawals limits — High Fees‘ is the name of the game when it comes to accessing money from a foreign bank account in Argentina.

ATM withdrawals are limited to a maximum of about U.S.$82-$200 per transaction for most banks, and only two withdrawals per day are permitted. Crazy, right?

What’s worse is that the low withdrawal amounts are combined with an ATM fee of approximately US$10 or more per transaction. This means that on top of getting the ‘official rate’ visitors who use ATM’s also pay 10% just to use bank machines here —and that’s withdrawing as much as possible at a time.

Even when the ‘Blue Dollar‘ market died down in recent years, visitors sought out alternate options to access their money from abroad to avoid Argentina’s high ATM fees.

Considering the difficulty using banks in Argentina, it is understandable that visitors go to the black market to get their hands on some pesos.

While technically illegal, the black market trade of currency is common in Argentina and there are no cases of foreigners getting in trouble with the law for trading money with a private entity. It’s best to be informed about the process though.

Visitors are advised to ask their hotel for a safe place to change their money into pesos.

We also help our guests who arrange activities, tours, or travel through this website with addresses for safe, reputable place to change money on the black market in Buenos Aires.

Before going to change money at a cueva, (as the underground exchange houses are known) look up the black market rate on a local website such as Ambito.com, which publishes it on their home page. Many of the exchange houses are on the downtown pedestrian thoroughfare of Florida Street, although they do exist in other areas of the city.

While visitors will see legal storefront currency exchange houses around the city, their rates are usually similar to the bank rate, so few people use them.

Some supermarkets will also take dollars if you purchase something and give you change in pesos, but be sure to compare the rate they give to the black market rate and the official exchange rate.

So what if you didn’t know about the Blue Dollar and are already in Argentina with no hard cash? Not all is lost. There are many money and electronic transfer remittance services offer closer to the black market rate. Western Union gives one of the highest rates, but users will have to have someone who can go send them money from abroad.

Another option (when borders open) is to take the popular day trip to Colonia del Sacramento, Uruguay to get dollars. In theory, Uruguay’s ATM’s issue USD, but it is recommended to take the trip on a weekday because the bank machines rarely have USD on the weekends.

Another option for those who can’t use Western Union or get dollars in Uruguay is to use the money transfer service Xoom. Not only does Xoom offer payouts higher than official rate, they also help you avoid Argentina’s outrageous ATM fees. Plus, if you use this Xoom affiliate link to sign up you get a $25 sign up bonus right into your Paypal account.

*(Send us a message if they don’t credit your account — occasionally it doesn’t go through automatically.)

Another option is Transferwise, an electronic money transfer service that started operating in Argentina last year.

This new way to transfer money electronically is cheaper because money doesn’t actually cross borders, but is done on a peer-to peer network.

Their system finds someone looking to transfer money in the opposite direction, and then conducts the transfer using a forex exchange rate, paying out in the local currency.

How to Deal with Money if Staying in Argentina Longterm

Those moving to Argentina, or even traveling here for any length of time, should bring a lot of cash.

As a backup, it would also be smart to open a checking account with a bank back home that refunds ATM fees if available.

-In the U.S., Charles Schwab and some credit unions refund ATM fees, while others such as Capital One and USAA refund a limited amount.

-Australians should look into Citibank Plus, an ING Orange Everyday account and Schwab checking.

-Canada doesn’t have many good options, but try out ScotiaBank/Tangerine-ING or HSBC Premier.

-In the UK most banks do not refund the banking fees, but Nationwide has some of the best rates. The mobile-based Starling Bank is also worth investigating.

Many of the checking accounts that refund international ATM fees have certain requirements, so you’ll have to figure out what works for your individual situation.

Regardless of your home bank, if you absolutely have to use your bank card in Argentina, to get charged as little as possible withdrawing money try to use ATMs that are on your home network.

The Argentine national bank mentioned above, Banco de la Nacion also has lower withdrawal fees at its ATMs than the private banks. 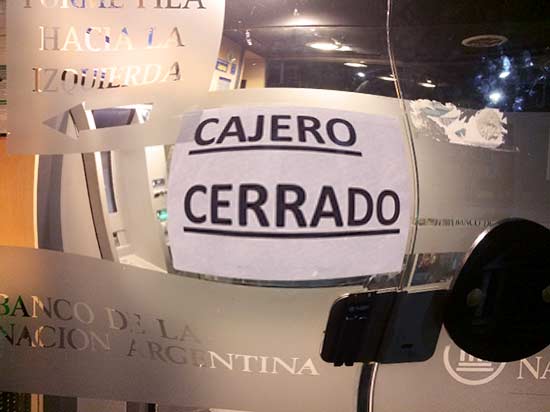 Even though there is now the high surcharge on the use of foreign credit cards in Argentina, it is also a good idea to carry a credit card that doesn’t charge foreign currency fees as a backup in case of emergency.