You are here: Home / Archives for chinatown 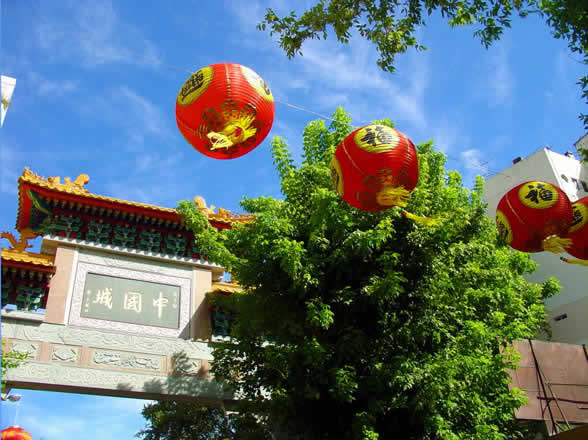 Buenos Aires’ Barrio Chino (that would be Chinatown) may only comprise a few city streets, but is nonetheless difficult to miss. Beginning alongside the train tracks at the intersection of Juramento and Arribeños in Belgrano, arrival at Barrio Chino is signaled by an ornate stone archway.

While Argentina’s only Chinatown is minuscule compared to those of London, Sydney or San Francisco, its cultural impact on the city is huge. The neighborhood has over a 100 Asian-owned businesses and receives 15,000 visitors every weekend.

‘Barrio Chino’ is a bit of a misnomer as the neighborhood is the home to a cross-section of Asian-owned business. Beginning in the 1980’s Taiwanese began to arrive in this area, followed in the 90s by those from Mainland China. Preexisting Korean, Japanese and Laotian immigrants began to congregate around the area as well. At first there was just a smattering of supermarkets. As the Asian immigrant population grew along came restaurants, schools, oriental variety shops, Chinese video clubs and beauty salons.

At the Tzong Kuan temple, one of the few Buddhist temples in the city, one can pay homage to a big shiny Buddha and attend classes in meditation, Chinese calligraphy, Mandarin, Kung Fu and Tai Chi Chaun. Those looking for alternative medical treatments come here to find acupuncturists and Chinese remedies at the neighborhood herbalists.

In 2006 a group of area businessmen tried to get Chinatown officially recognized as its own neighborhood along with the 48 other ‘barrios’ of Buenos Aires, but the Department of Urban Planning rejected the idea, noting that the denomination does not actually reflect the neighborhood’s true population.

While this area is the commercial focal point for the entire Asian community in Buenos Aires, Chinese residents make up less than 1% of the residential population of Belgrano. Most of the city’s 120,000 Chinese residents live in lower rent neighborhoods such as Once, Flores, Barracas and the city suburbs.

Officially Barrio Chino is limited by Juramento, Arribeños, Montañeses and Monroe Avenue, but as the neighborhood booms, its boundaries are creeping outward each year.

While Chinatown has become a fashionable place to visit for ever-trendy Porteños and spice-craving foreigners, a small but vocal group of area residents feel threatened by the neighborhood’s expansion. 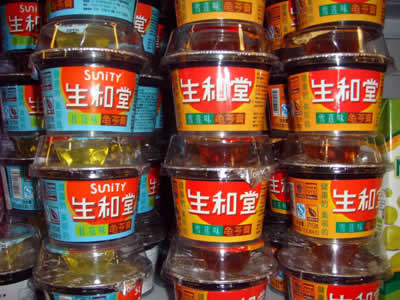 The controversy came to a head in 2009 when the $500,000 archway, shipped in five containers from China, was placed at the entrance way of the neighborhood. The installation was delayed because of complaints that it didn’t conform with zoning laws, but the city stepped in to rezone the area shortly before coronation, causing accusations of corruption. In an unusual move, then-Mayor  Mauricio Macri received the gift from Zhou Tienong of the Assembly of the People’s Republic of China in a ceremony at the Capitol building, cutting the ribbon in front of a drawing of the arch instead of holding the inauguration on site.

The same day the civil association, ‘Neighbors of Belgrano’ held a rally in front of the Chinese Embassy to denounce what they refer to as the ‘Archway of Lies.’ Among the group’s legal grievances are the felling of neighborhood trees, zoning infractions, the sale of expired food and garbage in the street, but considering that property values have risen in the area, they have widely been painted as xenophobes — or at least resistant to change.

For 27-year-old Vanessa Liao, coordinator at the Chinese-Argentine Cultural Association, the archway validates the growing Asian community in Buenos Aires. “The archway shows that we are really accepted here,” she says. “In recent years the Argentines are more accepting of us, they come here for the shopping and the festivals and even to study the language. There is more interest in Chinese culture now than when I was growing up. That’s good because people feel more at home here.”

Chinatown is celebrated for its great food shopping. Asian restaurants abound, ranging from hole-in-the-wall to high-end. The many stores in the area sell everything from inexpensive oriental merchandise and J-Pop (Japanese pop music), to Anime and manga (adult comics).

Barrio Chino’s biggest yearly celebration Chinese New Year is held every February on the closest Sunday to the date of the New Year.

How to Get to Buenos Aires’ Chinatown

Editor’s note: Click here to find out about this year’s Chinese New Year Celebrations
On Sunday, February 6th Buenos Aires’ Chinatown will be ringing in the Year of the Rabbit, 4709 of the Chinese calendar.

The festivities will include the yearly dragon dance through the streets, advanced martial arts performances, live music and even tango demonstrations made up of Argentine and Asian-Argentine dancers.

The streets will be shut down to automobile traffic and lined with dozens of stands. There will be calligraphy and origami demonstrations, information on Chinese astrology, Feng Shui, Buddhism and a wide variety of economical Asian street food.

The inauguration will begin at midday. Carlos Lin Wen Chen, or Carlos Lin as he’s known on channel 7 and as the host of the automobile TV program, Carburando, will emcee the event. Performances will begin at 2:00 p.m. and run until 8:00 p.m.

Once a small celebration enjoyed mostly by the Asian community, 2010’s Chinese New Year celebration saw a record 50,000 people come out to ring in the Year of the Tiger.

“A lot more Argentines are studying Chinese now to operate in the business world,” says Maria Antonía Diaz, secretary at the Chinese-Argentine Cultural Association, one of the groups organizing of the event. “Others are drawn to this area because of the variety of businesses and an interest in the rich culture of China.”

Due to the huge turnout of last year’s celebration there will be two stages this year. The main stage will be at Olazabal and Arribeños and the secondary stage will be located at Montañeses and Mendoza. 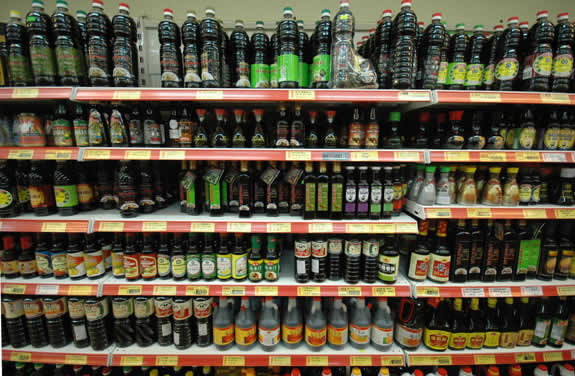 Buenos Aires’ Barrio Chino may only comprise two city streets, but it’s a bustling commercial area packed with people, restaurants, small shops, and, most notably, supermarkets that sell many of the items those with adventurous palettes long to encounter but have failed to find at major grocery chains such as Disco and Carrefour.

The typical trinkets that can be found in Chinatowns scattered across the globe – incense, baoding balls, little Buddhas – are in Buenos Aires’ iteration as well, displayed on shelves inside unnamed shops. These locales, which are easy to browse quickly, are crammed with touristy items like Chinese nameplates as well as seemingly random cast offs, like old makeup. There are some good finds if you search around though.

There’s a nice selection of detailed Chinese slippers in the back of Regalaría Ruyi (Arribenos at Juramento) for 30-35 pesos, as well as knockoffs of TOMS shoes. Further down, at Arribenos 2217, a store marked simply as ‘Fábrica’ (Factory) on the top of the door, has an impressive selection of kitchenware. Barrio Chino is also a good place for bargain art supplies, from paintbrushes of all sizes to little sets of gouaches and watercolors. 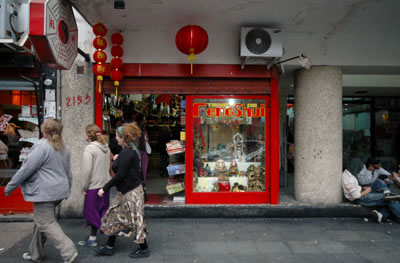 Far and away the best shopping to be found in Barrio Chino is in its supermarkets. The crown jewel of the bunch and also the oldest in the neighborhood is Casa China, stocking Asian, macrobiotic, organic, and dietary products.

Casa China is expat heaven, with its multitude of otherwise difficult-to-find ingredients that provide a break from the meat and carbohydrate diet of Argentina. Porteños are known for shunning spices and have little tolerance for anything hot. Thankfully, Casa China, exists for the rest of us: there are shelves of different spices and a lot of sauce options too, including various types of mustard and soy sauce (a 5-liter jug is available, if you’re looking for a lifetime supply), as well as standout Thai Sriracha hot sauce, made from sun-dried chilies. Casa China also stocks peanut butter, which is a reason to visit in and of itself.

Other items at Casa China include a variety of grains and legumes, such as black beans and lentils, and soy products, like tofu and soy milanesas (breaded patties). There are also shelves of rice noodles, as well as different types of instant ramen. As for frozen foods, Casa China sells frozen wontons and dumplings filled with pork and vegetables. There’s also a decent selection of imported teas, dietary and nutritional powders to stir in drinks for a morning energy boost.

Lastly, if you get hungry while shopping, you can pick up a sushi roll or a nigiri for a bargain price. There’s not much variety with the sushi – each roll seems to be a variation on the Philly Roll or the Salmon Roll – but it is fresh and tasty.

Another longtime supermarket that warrants a mention is Asia Oriental. What sets Asia Oriental apart is its fish market. Located at the back of the store, the fish market sells fresh trout, sole, calamari, and a variety of other seafood at decent prices. Pre-packaged fish, such as a salmon filet, is available as well. Asia Oriental is an enormous store with a reception desk and small counter for ordering Chinese food on the spot. Almost all the products are labeled in Chinese but, besides the fresh fish and Chinese fast food, Asia Oriental sells more or less the same items as Casa China. 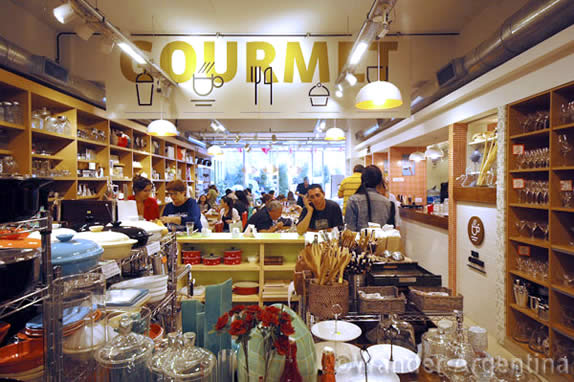 The latest market to the scene, Tina & Co. a ‘bio market and cafe,’ brings a more upscale flavor to Barrio Chino with three floors of specialty food items, including items for celiacs, sauces from around the world, a wide variety of teas, organic wine and imported alcohol. On the upper floors are home decor and beauty products. The third floor features a sunny and comfortable ‘gourmet’ cafe serving up lunch items such as sushi, salad, tartas, and empanadas. 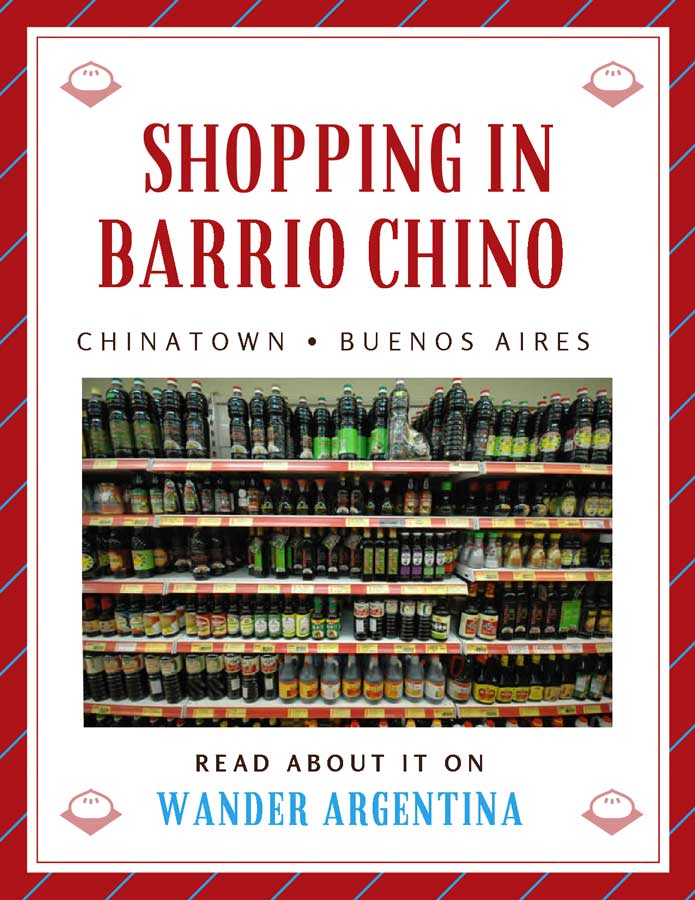