You are here: Home / Archives for guarani 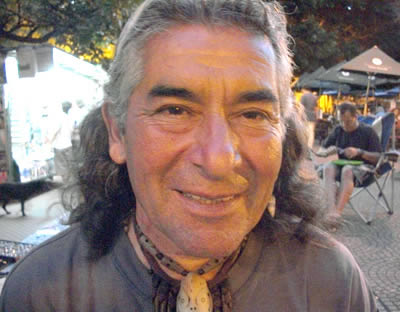 Q: You’re Guaraní and from the province of Chaco, what was life like growing up?

I was raised by a pig in the Impenetrable (‘impenetrable’) jungle. I was abandoned by my mom. I hated that she abandoned me but, with life you never know. Maybe the pig that nursed me also killed her.

Q: You were raised by a pig? There are a few documented cases of children who were raised by wild animals, but they don’t learn to function in normal society like you do. Many times they can’t walk on two legs or talk.

There were some aboriginal people around, they would let me stay nearby but didn’t help me. That’s why I know Guaraní, it’s my first language. I’m not the only person who grew up alone in the jungle. In that area there are others like me, but people tend not to talk about these things.

I may seem normal but I’m not. Look at all these spines embedded in my feet and legs. My hands were closed when I was young and I only used my thumb and forefinger. I was never a child. Now I am more of child then I was then.

In my apartment I don’t have furniture. I sleep on the floor with my ten cats, who are like my children. I’ve never tried alcohol or coffee. I don’t eat meat.

Q: What did you eat when you were a kid in the jungle?

I ate seeds and fruit, just like I do today. I’m not sure how I learned to walk, I think I saw the people on two legs and I stood up so that I could shake the trees. I can still walk on four legs though and growl and bark like an animal.

There were also fields with wheat, corn and squash, which I ate raw, just like I do today. I don’t cook at all.

Q: How did you get to Buenos Aires then?

I slept in a hollowed out tree and one day they had cut the tree. I went looking for it and climbed in because that was my home. It was like this big cage with mesh around it. I wasn’t sure if it was a truck or a train because I had never seen these things. I hadn’t had contact with modern society.

I was trapped in there. After a long time it arrived in Buenos Aires, but I didn’t know where I was at the time. When I arrived I was very weak because I hadn’t drunken water or eaten for days.

I was thrown into a storage area. In there were sacks of potatoes and onions, which I ate. Then people came and I growled and bit them. They must have thought I was a chimpanzee. Finally they brought a Guaraní who came and talked to me. I could understand Guaraní, but I could only say my name and nothing else at that point. The Indian told me not to bite people. They cut my hair and gave me clothes. The man explained that I had to wear clothes because it was considered embarrassing not to.

Q: How old were you?

I have no idea. Maybe I was the age of that child crying over there. (Points to a boy of about eight years old crying on the sidewalk.)

Q: And then what happened?

Then they made me wash pots. I don’t know how long I was there — a long time. Finally my hands were so raw that one day they threw me out with my hands wrapped up in bandages. I went looking for jungle and walked and walked until finally I was so tired I slept on the street. When I woke up a man was putting me on a bus. He put me in a place with a bunch of animal skins. I didn’t know what the place was but now I know it was a factory. This is the reason that — to this day — I still hate leather.

There were older kids who came that spoke Guaraní. They didn’t know what was wrong with me. They thought I was mute. The kids taught me Spanish bit by bit while we worked in the factory together. They went home but I stayed there at night. Finally they told me they were going to get me out of there.

They told me to leave through the window at night and they would be waiting outside, but when I climbed out there was a policeman there. I fought with him but he helped me. He took me to the police station and then they put me in a hotel. They had me work in an auto parts factory. Finally one day they said I had to go to school — that’s how I learned numbers and they also had me take Taekwondo. One day the teacher put up his hands to show me how to count with the fingers but I thought he was going to hit me and I hit him first. I was still aggressive at that point. I didn’t understand. And then I was thrown out of school.

Q: And later you were in the Malvina’s (Falkland) War you told me?

Yes, but I don’t like to talk about that. It was just a massacre. They didn’t even teach us how to use the rifle. They just sent us there to die.

Q: Doesn’t it annoy you that people ask you questions all day and ask you for favors while you sit here in Plaza Dorrego selling your wares?

Everyone around here sends people to me all the time to ask me things. I like to be useful. Even though I don’t know how to read, I know a lot of things. There are those that study a lot and know nothing, and there are those who never studied but know a lot.

Q: Do you think you will always sell artisan items here in Plaza Dorrego?

Yes, I feel free. I enjoy the sun, i teach, I don’t have stress. When I am ready to die I will go back to the jungle. I will know when it’s time.

Q; Why do you insist I call you the ‘animal of the week’ instead of ‘Porteño of the week’?

Call me anything but a porteño please! I’m proud to call myself an animal. An animal doesn’t kill for sport like humans do. A human is the worst thing that could exist on earth. Despite thinking he is intelligent, he is the most ignorant species on earth.