You are here: Home / Archives for colectivos 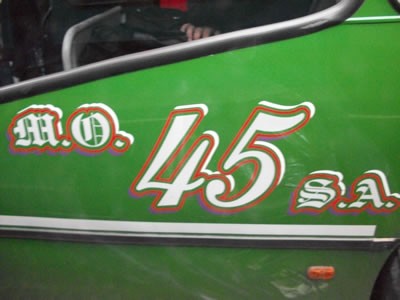 The Buenos Aires bus— so noisy, so smokey, but so darn affordable and practical they’ll get you anywhere.

Here are the steps to take a bus in Buenos Aires:

1. Figure out your route

First you’ll need to figure out which bus you need using an internet site such as Buenos Aires’ interactive map, for which there is also a phone app.

If you’re old school or analogue-loving you could try to find a Guía T booklet, but they aren’t being printed anymore.

Once you know which bus you want to take, another challenge can be figuring out where the bus stop actually is located.

On major streets such as Corrientes and 9 de Julio they are well marked. The bus stops are every two-and-half to three blocks, and usually marked with the numbers of the lines that stop there as well as a list of major stops. Just walk along the avenue or street until you see a stop.

Sometimes the bus stops are not well marked in residential areas and you will need to ask someone: ‘¿Dónde está la parada para el 24?’(Where is the stop for the 24?)

Store and newsstand owners are accustomed to answering questions about the buses because no one knows where the bus stops are if they are not familiar the area.

During the day there will often be a line of people waiting for the bus, you can ask them as well. If you don’t speak Spanish well you can also point to your bus number on your phone and offer a perplexed look to be pointed in the right direction.

3. Make sure you have a Sube smart card to pay the fare

Before getting on any bus in Buenos Aires or other cities, you need a Sube smart card, to pay the fare because the buses no longer take change or bills.

The city finally delivered on its promise to install card readers a few years ago, which has greatly reduced the need to hoard coins to pay for the bus as citizens had to do before. It was a big problem, oh the good old days!

The basic fare for the general population costs under US$0.25 (in the peso equivalent).  Today the smart card, which costs AR$50 itself is the only way to ride public transportation.

4. Get on line at the bus stop 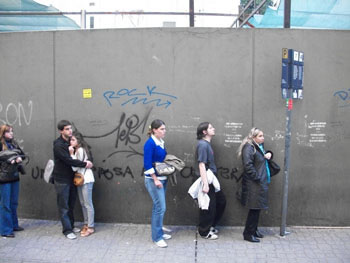 Aside from rush hour on very busy avenues, there is usually just one line of people for all the buses that go by any particular stop.

Get in the back of the line.

When you see your bus coming along, identified by its number above the windshield, put out your hand to indicate that you would like to get on the bus – each stop handles several buses, so if no one on line flags the bus, it will speed on by.

Sometimes it will speed on by regardless – chalk it up to the inner complexities of the quintessential Buenos Aires bus driver.

5. Tell the bus driver where you are going

Once you are on the bus you need to tell the conductor where you are going so he  or she can charge you the appropriate fare.

Simply name the cross street or location where you plan to get off, for example: ‘hasta Cordoba, por favor.’

Many passengers, accustomed to taking the same route everyday, just tell the conductor how much to charge them. Most fares for shorter distances around the city, from three to six kilometers, cost less than US$0.20 and they go up from there.

If you prefer you can make like a local and also just tell the driver, ‘viente, por favor.’

After you’ve indicated your stop to the driver, hold up your Sube smart card to the card reader next to the driver.

Once on board, the elderly, pregnant women and anyone with kids obviously has priority seating so if you don’t have the good fortune to get a seat take a steady stance and hold on tight for a herky jerky ride!

When you are ready to exit the bus, push the button located on the pole by the back door.

Be careful exiting the bus — sometimes they don’t quite get to the curb and barely stop.

If you are let off into the street, be careful to look backward toward the oncoming traffic before jumping off to make sure there are no bicycles or motorbikes speeding up from behind. 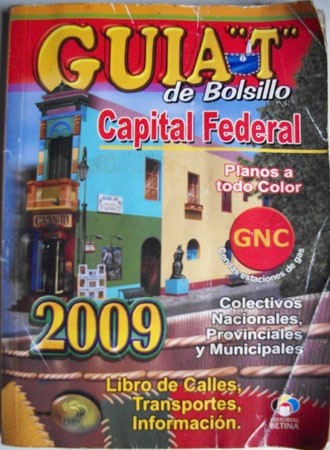 At first figuring out Buenos Aires’ complex bus system can seem like a harrowing task. There are 110 bus lines; each with their own complicated routes crisscrossing the city. Get your hands on a Guía T, a guide to the bus system that can be bought in a handy portable version at any newsstand for cheap and you will begin to decode the matrix that is the Buenos Aires’ bus system.

The Guía T is a low profile, local’s way to figure out how to get around the city and is also abundantly useful to pedestrians.

There are three sections in the Guía T. In the front of the book, there is an alphabetical index of all the streets in Buenos Aires subdivided with various address ranges, each pointing you to a page with the appropriate map. The body of the Guía T is made up of tiny maps of the entire city with a list of the corresponding buses on the opposite page.  In the back of the book are all the various buses listed in numerical order with the details of their routes and pictures of the buses to demonstrate the color scheme of each line.

How to Use the Guía T

1. Look up your address

Just look up the address you are traveling from in the front of the book, the index gives a page number and co-ordinates, such as 16-A4, page 16, quadrant A4. On that page you will recognize a map of your location divided into a grid. On the left hand page is a corresponding grid with a list of buses that pass by that location.

2. Look up your destination 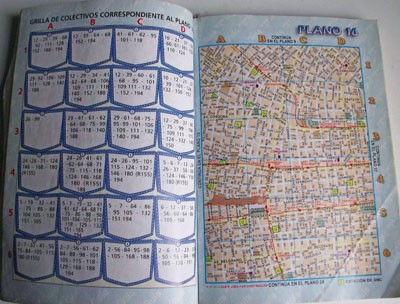 Secondly, look up the destination you are trying to reach as you did in step one.  Flip back and forth between the two pages to compare the bus lines listed in the grids for the two locations. If you are not traveling too far, there will almost always be a bus that goes by each location. If not, look at the surrounding quadrants to see if there is a corresponding bus.

There is no transfer system between the different bus lines, so you may have to walk a few blocks. On the rare occasion that you need two buses, you will have to pay twice but since taking two buses is rather impractical, consider taking some other form of transportation such as the subway, taxi or a bus and brisk walk combo.

Once you figure out the bus you need, look up that bus line listed in numerical order in the back of the book to see what streets it travels on – since many streets are one way, the buses often travel on slightly different routes on the going and return trips.

You will see both the ‘ida’ and ‘vuleta’ (going and return) listed street by street, as well as a little picture that shows the color and design of the bus.  There are no times listed for the buses –they come when they come but because of the high volume, most buses come by at least every 15 minutes during the day.

Figure out which intersection you will be getting off at – you will need to tell the driver anyway to pay your fare. Check this post for more instructions on taking a bus in Buenos Aires.

Websites and Apps to Get Around Buenos Aires

In addition to using the Guía T, you can also use Spanish language websites such as Viaje Facil  to figure out the bus system. On the left hand side of the website, simply put in the starting and ending destinations press enter and the site will tell you which bus lines to take and an approximate journey time.

Los Colectivos is a website that gives the phone numbers for the various lines and lists the frequency of the buses in minutes, useful information that the Guia T doesn’t provide. X Colectivo is another website that is a bit hard to navigate but it also has the major bus lines listed as well as lists of buses that pass by important sites. Also helpful is the city’s website search engine, Como Llego.

Additionally those who understand a bit of Spanish can call 131 toll free for bus information. The line is often busy, but if you have a telephone it’s worth a shot.

→ Check out the Buenos Aires Walking Tour, which gives you a great primer on Buenos Aires and how to use public transportation in the city