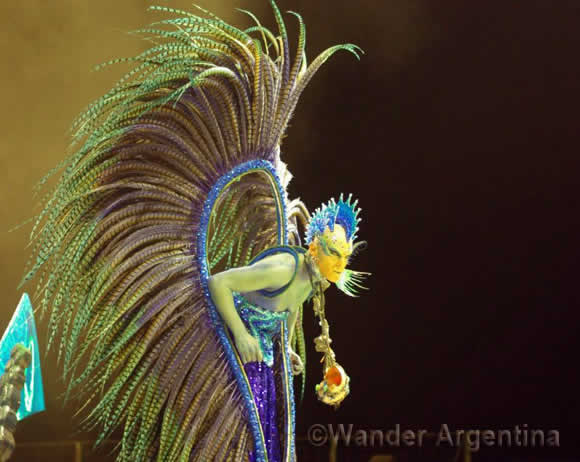 Argentina’s quintessential provincial Carnaval is in the riverside town of Gualguaychu, a place as crazy and mixed-up as its name suggests during Carnival’s celebratory days of February.

This party pueblo, nestled in the often overlooked province of Entre Rios, is just a few hours north of Buenos Aires.

During February’s long weekend of feriados, or holidays, young Argentines and foreigners alike make a mass exodus from the Buenos Aires’ downtown Retiro bus station to Gualeguaychú for a few days of annual Carnival debauchery. Many eager youth start the party on the bus with fernet and cerveza in tow.

When attendees arrive in the dusty Gualeguaychú bus station, many tumble out and go straight to kioskos, convenience stores, to stock up on fernet, cola, and food for the long weekend. Most then make their way to bustling river-side campgrounds, like Solar del Este among others.

Days are spent riverside, sunning in the sand, and dancing under spritzing pipes in front of a large music stage. Attendees spend their nights partying in the town streets as they pass around frothy liters of fernet con cola, Argentina’s 20-something preferred cocktail, dancing to electronic Latin hits. Early mornings are spent recovering in bed, usually in a tent. Rinse in rio, repeat. 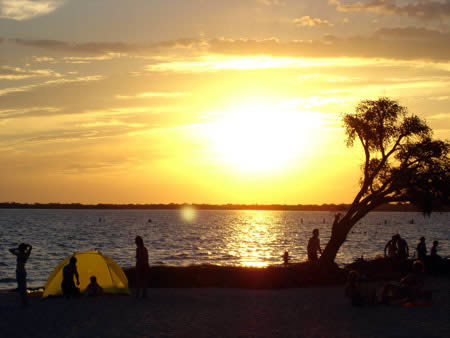 Aside from the epic Carnival parade, the weekend’s party festivities are neither children nor rest-friendly and those who chose to camp must be ready for a serious weekend of partying to attend this ultimate Argentine Carnival. It’s not quite Rio de Janeiro, but this party  gives its U.S. counterpart, New Orleans’ Mardi Gras a run for its money.

Those who congregate at campsites are looking for full-blown Gualeguaychú Carnival debauchery — or wanted something more low-key but were too late booking a hostel or hotel.

Tents pop up like colorful mushrooms as friends cluster the structures close together in loose polygons. Stragglers arrive late into the night but the Argentine spatial mentality prevails — there is always room for one more. Some start modest camp-side asados — Argentine barbecue grill outs — while others wait in line at campsite convenience stores to stalk up on jamón y queso, or ham and cheese sandwiches, to prepare their stomachs for Carnival’s first night of full fledged mayhem.

Most campers drink a quarter of their cola liter with their picnic dinner and fill the bottle’s void space with fernet and then proceed to pass it along to both friends and nearby strangers. This communal drinking ritual takes place throughout the weekend at both nighttime street parties and during the all-day beach celebrations.

After dinner, young attendees filter out of the campsite onto the dusty road that serves as a vein to the center of town. Here, youth from all stretches of Argentina, as well as Uruguay and even Brazil rejoice in the streets dancing to cumbia, a popular genre of Colombian dance music, and pop music coming from large speakers placed in stationary cars. People dance, buzzed men shout piropos — flirtatious cat calls — and all engage in the annual Carnival tradition of spraying each other with aerosol party string.

After dancing into the wee hours, the fernet in the liter bottles is either finished or whirled into the air to spray fellow dancers. Just around dawn, the dancing Carnival junkies head back to their tents to retire for a few hours of much needed shut-eye.

Subsequent to a few hours of sunlit sleep, people start to stumble out of their tents, throw on a swimsuit, indulge in a traditional breakfast of cookies and mate, and then they retire to the sunny river shores to do it all again. At Gualeguaychu’s Carnival, Argentine party stamina is at its finest.

A canteen/café usually lines campsite shorelines in addition to large stages with gigantic outdoor standing-cum-dancing areas in front of them. The official dance area at the campsite Solar del Este is housed under a network of tiny metallic tubes that spew spritzes of refreshing water at raging crowds. Though these sexy waterworks may seem to mimic MTV’s spring break specials, the extreme heat and high-density dance floor necessitate this cooling system. On stage MC’s energize the crowd throughout the day’s hottest hours and offer a lineup of party-vibe pop music.

Tickets for the Carnival parade range from reasonable to pricey, and are well worth it. It is held a short cab ride away from campsites at the corsódromo, a long runway surrounded by bleachers built just for the annual Carnival event.

Parade entertainment by the comparsas, or dance and drum troupes, is stunning. Hundreds of virtually naked professional dancers decorated in large peacock feathers and painted smiles adorn five-story floats as they move in sync on tiny multilevel, flower pedal platforms and other festive decor.