On Florida Street, downtown Buenos Aires’ pedestrian mall, near the corner of LaValle, it’s inevitable to come across some shady-looking characters yelling out, ‘cambio, cambio!’ 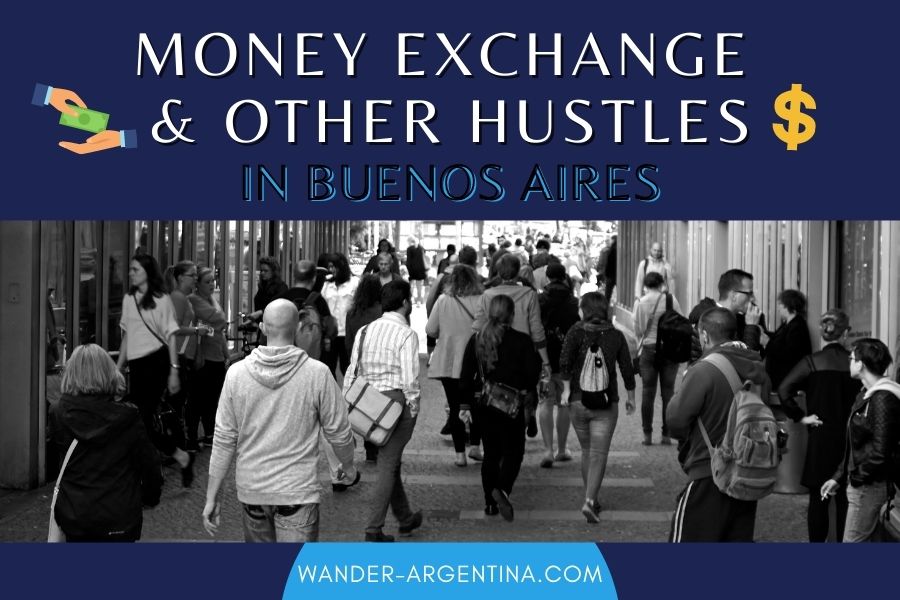 These ‘unofficial’ (read: illegal) money changers, are known in Lunfardo as arbolitos.

A new administration regularized the currency situation in late 2015, these money changers offered dollar and euro exchange rates that were much better than the banks.

Fervent travelers will recall that during the years of 2012-2015 travelers to Argentina could get up to 45% more value from money changers for their foreign cash than at the bank.

Soon after winning the election in November 2015, Argentina’s new ruling party regularized the currency situation. From 2015 until late 2019 the parallel currency market was much smaller, and travelers were no longer coming to Argentina carrying wads of foreign cash.

The money changers remained though, because Argentines prefer to save their money in dollars instead of the inflationary peso.

With the return to power of the previous administration in late 2019, the black market for currency is now back again. The spread between the official rate and black market rate is currently a whopping 100% as of January 2022.

Black Market Exchange Versus the Bank

To compare the bank rate and the ‘informal’ rate, see a local financial website such as Ambito. The ‘dólar oficial‘ is the amount you would get changing money at the bank or at an ATM (not including the crazy high ATM fees). The ‘dólar informal,’ or ‘informal dollar’ is the black market rate.

To change foreign currency at the bank, visitors with no local bank account have to go to the National Bank with a passport, and typically wait in a long line for the simple transaction.

Those who want to take advantage of the black market rate, and skip the lines at the bank will need to find an ‘arbolito‘ or black market money changer.  Travelers are advised to get a recommendation for a reliable exchange house and not to do transactions in the street. (Wander Argentina is happy to advise our clients of reliable, safe currency exchange houses).

The worst-case scenario with illegal money changers is that one may find oneself in an intimidating situation or stuck with a pocketful of fake pesos notes, but that is not likely as Argentina’s major counterfeiting ring was busted a few years ago and today there are not as many fake bills.

The main problem with using an ATM to withdrawal cash while in Argentina, aside from getting the official rate, is that the withdrawal limits are low and the fees are high.

Expect to pay about a US$10 fee per withdrawal, unless your bank reimburses fees.

Money Transfer services such as Western Union now provide the best rate for those with overseas bank accounts who want to transfer themselves money electronically.

These clandestine ‘cabarets’ such as those Julio Cortázar once encountered nearby in Galeria Güemes have existed in this area a long time but are today rather predatory in nature.

Those who enter into these ‘whiskerias‘ as old timers call them, will almost certainly find some unpleasant surprises, and possibly get roughed up and shaken down for money they weren’t planning to spend.

Although customers are usually invited to take a look around for free, signs in many of the establishments state that there is ‘a minimum drink charge’ and that ‘management can’t be held responsible for any valuable personal items that go missing.’

Local men who enter these places are typically charged inflated prices for drinks — one for them and one for one or more scantily clad bar girls. Tourists who are generally unfamiliar with the swindle are the holy grail for these businesses and the prices quoted to them will certainly be excessive. The higher the price demanded, either for services or to extricate oneself from the situation, is an indication of how dumb, rich or scared they judge the customer to be.

The strippers and prostitutes in these establishments, generally women from poorer provinces or countries such as the Dominican Republic, are sometimes trafficked women. Generally they charge upward of US$100 (on top of the drink charges) and should be considered a high health risk as the sex industry is a legal grey area and is unregulated, with no std screening in place.

*EDITOR’S UPDATE: in 2016 Buenos Aires followed the lead of Cordoba and outlawed ‘whiskerias‘ y ‘las coperas‘ (the women hired to serve drinks and socialize with the men), so now they are a little more underground — but not much.

Buenos Aires still has ‘happy ending’ massage parlors and brothels operating all over the capital.

Prostitution is not criminalized — but pimping is — so many sex workers today work independently, advertising themselves and their phone numbers with flyers, often attached to street poles downtown and along major avenues around the city and, increasingly, on the internet.

In other major cities of the country, ‘whiskerias’ still exist and are sometimes raided to rescue foreign women being trafficked there.

As with money changing around Florida Street, if you are the victim of a swindle of seduction it almost certainly won’t help to go to the police — it’s an open secret that they receive a cut of the profits and some top politicians have been accused of being involved in the industry.

In short: nothing good can come from following strangers who approach you on Florida Street unless you know the turf. Don’t say we didn’t warn you!

For those who understand Spanish, this hidden camera expose from the popular local TV program,  ‘Fuera de Foco‘ shows how the cabaret bait and switch works:

2 thoughts on “Money Exchange & Other Hustles on Florida Street”