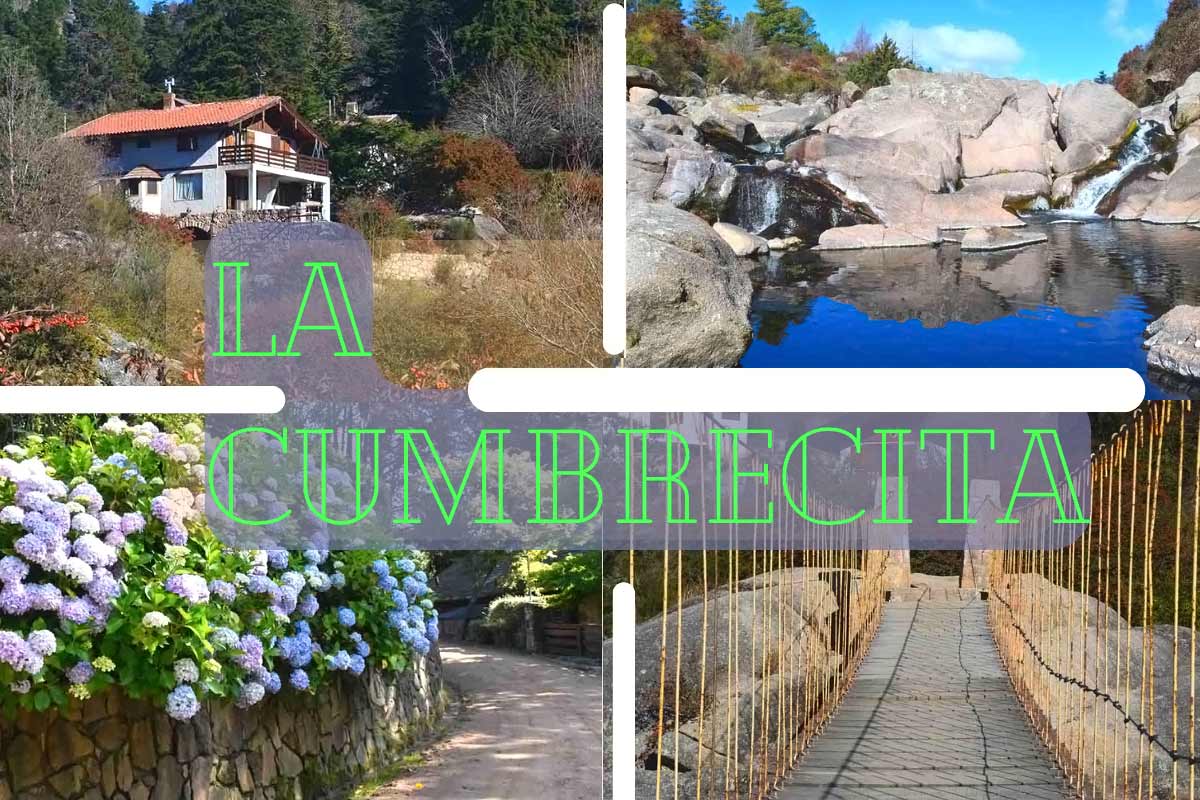 The German-founded pueblo with no paved roads is situated in the the Sierras Grande mountains of the Calamuchita Valley in Córdoba Province.

Nestled along the Middle River (Río del Medio) and surrounded by sierras and waterways, it’s a serene, if slightly kitchsy, eco-tourism destination for families.

A native of Berlin, a 40-year-old Helmut Cabjolsky came to Argentina with his family in 1932, after being transferred from Germany by the Siemens company.

Desiring a place that would remind him of his homeland, in 1934 Cabjolsky bought 500 hectares (1,236 acres) of land in a remote section of Córdoba as a retreat for his annual holidays.

His in-laws came from Europe that very year to build roads and plant trees in the area.

In 1935 they started building a summer chalet. Originally the land was named ‘Oberalmdorf‘ (‘village at the top’ in German).

Other pioneering families, the Anz, Fleckenstein, Knöepfli, and Zechner’s joined them. Many knew each other through Goethe German school in Buenos Aires, that still operates today.

Through the years, a road to the area was constructed and lots of land were sold to friends and family on the condition that any new building conform to the Alpine-style architecture..

They turned the barren land into the shady getaway that is today by planting thousands of evergreens oak and birch trees.

The founder of Confiteria Liesbeth, known as ‘Tante,’ and born in Dresden in 1910, lived well into the aughts.

The town, with just under 1,000 full-time residents operates administratively as a commune.

The village was declared a protected area in 1966. The decision to continue as a pedestrian-only town was written into the bylaws in the 90s.

This town also uses almost exclusively solar energy, recycles all its water and composts most of its organic waste according to CNN.

Visitors to Cumbrecita walk along a cobblestone path (the last road before town) and enter via a beautiful wooden pedestrian bridge.

The bridge leads right onto the main street of the Historic Quarter path.

The path is a 35 minute walk from start to finish winding through the forest.

At dusk and dawn it’s not unusual to spot foxes and skunks. There are also pumas in this region.

Along the way there are interesting stops and wooden sculptures, an elf, fox, and gaucho among them, made by a range of artists from the reclaimed trees that fell during a large storm here in 2012.

Along the Historic quarter path is ‘Chess Plaza,’ a miniature plaza, in the form of a chess board where visitors can play chess with beautiful metal chess pieces.

Continuing on, a curiosity is ‘The Fountain Passage’ (Paseo de la Fuente) a large wooden barrel for water with a bell attached, which was used in case of emergency in the old days.

The little chapel with room for 45 congregants was built in 1967 to welcome those of any faith.

The Historic Quarter path ends at La Olla (The Pot), a circular natural spa designed by nature and surrounded by coniferous trees.

Six meters deep, the popular swimming spot is always a calm respite, even when it’s the most popular spot in town, during peak season.

The returning path from La Olla goes by the ‘Dark Street’ or  ‘calle obscura,’ so named because of the intense shade provided by the eight gigantic pine trees with impressive, exposed roots.

At the furthest point is one of the first buildings built in the town, which is named ‘Carpe Diem.’

Trout Lake (Lago de La Truchas) is another pool fed by various streams that is perfect for a picnic or dip in the pool.

Dont’ trust google maps to get there. Start at Confiteria Liesbeth (named for Liesbeth Mehnert, originally the Cabjolsky family housekeeper).

Follow the river downstream on for 400 meters until reaching Hornero street, where the path starts.

As the name suggests, fishers (and diners) will find there is a lot of trout in the waterways of the region. After reaching the lake, walk further on to find little sandy beaches along the river.

It’s a 25 minute hike along the Almback stream to reach the town’s 14 meter high waterfall.

This trail may have slippery rocks, so wear shoes with good tread.

To reach the lookout, it’s a thirty minute walk uphill, starting in front of the Cabañas Rio Manso.

It’s best to do this hike early or late afternoon in summer, as there is no shade.

Further along the same trail is La Pampita, an untouched area of grassy sierras popular for horseback riding where its not unusual to see Andean Condors flying above.

The trailhead begins to the right of Liesbeth tea house, painted green sticks mark the path.

The hike is all uphill for about two km (between 40 minutes to an hour.)

Nature lovers and photographers will be delighted by the silver-colored trunks of the leafy birch groves in spring or summer, and the fiery-colored leaves in the fall.

The vegetation becomes more scarce as the altitude increases.

At the peak, hikers are rewarded with a panoramic view of the entire Calamuchita Valley. often with horses grazing below and eagles above.

German, Swiss and Austrian Food (and Beer, of course!)

Cumbrecita is a good place to get a break from the typical Argentine cuisine of pizza, pastas and asado.

Restaurants with names such as Edelweiss, Gute Meister and Prosit Bierhaus serve dishes such as goulash with spatzle, smoked trout, raclette and slow-cooked lamb cooked with locally foraged mushrooms.

The fast-growing beer brand has a number of breweries around the country, with several in Córdoba and Buenos Aires, including in Palermo and on the water in Puerto Madero in Buenos Aires.

In 2006 they debuted their adventure theme park in La Cumbrecita.

To get to the Peñon del Aguila adventure park just walk through the village until you find the peculiar bridge that heads to the ‘Cedar Station’ (Estación de Cedro).

Here passes to the park will need to be purchased, they vary depending on activities selected.

The activities and excursions are sold a la carte and are reasonably-priced.

Visitors then board a replica of an Austrian steam locomotive from the 19th century on tires, heads to Pine Central Station (Centro Pino) to arrive at Peñon del Aguila.

Gambrinus is a quasi-saint of beer brewing and joviality from European folklore dating to the middle ages.

The musical production is set in the XIII century County of Flanders, where the first beers were brewed with hops.

How long to stay

An overview of Cumbrecita can be experienced on day tour from the bigger German-founded town, General Belgrano nearby. There are also tours from Córdoba capital but due to distance it makes for a long day.

Cumbrecita is worth staying at least two or three days though, especially if interested in going to the adventure park, hiking the trails or doing an excursion.

Some excursions such as the subterranean river excursion, through the caves of the underground river and to a hidden waterfall (Cascasa Escondida) take a whole day.

Clothing needed will depend on the season, but due to the elevation there’s always a considerable difference between warm daytime and cooler night temperatures.

There is not any bank, ATM, or petrol station in La Cumbrecita, so those who don’t want to get the credit card rate should make sure to transfer yourself money or do a blue dollar exchange before coming.

The nearest point where you can find atms, money transfer services or Western Union is Villa General Belgrano.

It is advisable to fill up the car’s gas tank before coming here and bring cash, even though most shops accept debit and credit cards, with the slightly lower exchange rate.

Even in the winter off season reservations are a good idea as many hotels, cabins (and shops) will  be closed.

The ideal option is to get a flight to Córdoba Capital, the nearest commercial airport, which is 120 km (75 mi) from La Cumbrecita.

From there, it’s necessary to rent a car or take the buses described below to get to this out-of-the-way village.

By Car from Buenos Aires

It takes nine hours to reach La Cumbrecita from Buenos Aires by car.

Take route nine, perhaps with a stop in Rosario, half way.

After a total of 663 kilometers, hang a left at Rio Segundo onto provincial route C45. Before reaching General Belgrano take Route 5 going west. Route 5 turns into Route 109, which winds its way all the way to Cumbrecita.

There is a parking lot right outside of town.

Driving from Cordoba is the best option, as taking public transportation to La Cumbrecita will require some patience, as it involves a stop in Villa General Belgrano and two buses.

If renting a car from Córdoba capital take route 5 out of town and then provincial route 109. Make sure you have change, as these are toll roads.

Cumbrecita is two-and-a-half hours away from Córdoba by private car.

From the provincial capital it takes two buses to get to Cumbrecita: One to Villa General Belgrano (where Argentina’s Oktoberfest is hosted every year) and the other with Pajaro Blanco bus to La Cumbrecita.

This journey takes three hours total by bus, assuming the wait isn’t too long in Villa General Belgrano. In spring and summer buses are frequent.

Check the Pajaro Blanco bus timetable while planning your trip: You can also find their office in the Córdoba bus station at stall #31.

Highly recommended restaurant for Central European delicatessen and pastries. A bit off the main path and only open in the peak summer season.

The highest rated restaurant in the village, along Paseo Bajo. Family restaurant with some unique dishes with lovely presentation. Overseen by a house cat named Botitas (Little Boots).

More typical Argentine cuisine, despite the name. Among the town’s favorite’s — huge portions, with a lovely terrace

La Cumbrecita has lots of cute rustic and even more upscale wooden cabins as well as small family-owned hotels, a hostel and one camping spot called Camping Sol y Luna.

Availability is low in the summer months and other holidays, so book in advance.

Originally founder, Cabjolsky’s summer house, it has been operating as a hotel since 1938.

A homey place that looks like a Barvarian Inn and has a pool.

Comfortable raw log-style wooden cabins for two to seven guests. Cabins are located a few meters from the chapel and the chess square.

For a good budget option, Cucu Haus is located on the main street. The building with a huge cookoo clock on the front also has a well-known restaurant.