Las Grutas is 1072 km from Buenos Aires, which explains why it is principally a popular tourist destination for those who reside in Patagonia and relatively few Porteños vacation here.

Las Grutas is also not well-serviced by flights, although there are a few flights to nearby San Antonio Oeste.

If arriving from Buenos Aires or any other city, one could also take a flight to Viedma, 192 km (119 miles) away and rent a car, or take a bus from there. The drive from Viedma to Las Grustas takes two hours, and the bus takes three.

The one-and-a-half hour direct flight from Buenos Aires to Viedma runs a couple of times a week out of Aeroparque Internacional Jorge Newbery in Palermo and costs between $100-$250 roundtrip.

At the moment, Aerolineas Argentinas, who are the only game in town for this flight, since budget airlines bailed on Argentina. 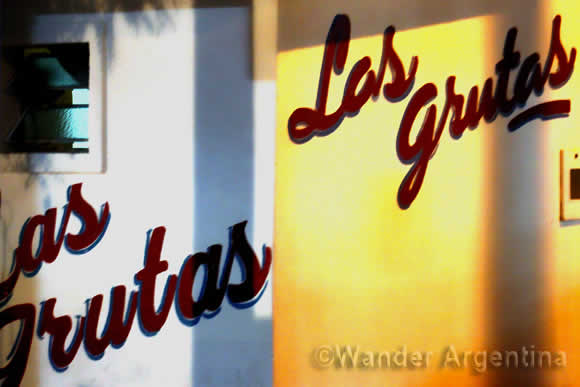 → Check prices and availability of flights to San Antonio Oeste and Viedma.

Las Grutas is well serviced by bus and that is how many young local wanderlusters travel.

These are some of the better bus companies that service the area :

Getting to Las Grutas by Car

The trip to Las Grutas by car from Buenos Aires takes a bit over 13 hours.

Take Ruta 3, passing through Bahía Blanca and Viedma, directly to San Antonio Oeste, 15km from Las Grutas. From there you’ll see signs leading to Las Grutas. To see the exact route from Buenos Aires or to check the route from other cities, take a look at Google Transit.

→ Read about driving and renting a car in Argentina here

There used to be a luxury train with a restaurant, disco and cinema called Expreso Arrayanes that made it possible to reach the area from Buenos Aires by train via a connection in Bahía Blanca.

The name was taken from a similar service provided at the time by Ferrocarriles Argentinos, which departed from the City of Buenos Aires to San Carlos de Bariloche.

As with many trains in Argentina it no longer runs, and it’s not possible to get to Viedma by train from Buenos Aires, although a plan is in the works to get it going again in the next few years.

There is a train that services the area from Bariloche to Viedma that passes through San Antonio Oeste, 16 km (10 miles) from Las Grutas.

The Bariloche-Viedma line is one of the oldest and most in-demand train trips in the country, which means it can be hard for visitors to get tickets and they usually need to be booked far in advance.

It’s meant to be a passenger train for locals, but some tourists take the train as a curiosity, as it’s a famous train line that has struggled to survive with the dismantling of Argentina’s trains.

Additionally, the Tren Patagonico webpage has been down for a longtime and the passenger vender website Platform 10 doesn’t even have train service listed on their table of contents.

The train only runs once a week in either direction.

It leaves every Sunday from Bariloche heading to Viedma and the Viedma-Bariloche trip takes place every Friday.

At the moment the best place to book tickets online is the website Plataforma10. Visitors can also go to the Tren Patagónico office in Buenos Aires, but it is only open weekdays between 10 a.m. and 3 p.m.

Las Grutas town spans just a few city blocks, so you can walk pretty much everywhere in town by foot.

There are buses to San Antonio Oeste every thirty minutes.

Renting a car if staying in the local area is not necessary unless you want to explore some of the surrounding sites. One worthwhile excursion is the penguin colony at Sierra Grande, 120 km to the south.

Be aware that in the summer high season (Dec-Feb), it is necessary to make hotel or hostel reservations for Las Grutas, because this once-secret hideaway is a favored vacation spot for people all over Patagonia.

A little away from the center of the action, 1km out of town, is Marinas del Golfo offering comfortable furnished apartments for rent.

All of the apartments have a private balcony.

Guests can rent a bike, get a massage, and the friendly staff will help you to arrange sightseeing excursions.

Melewe Las Grutas is listed as a three-star hotel but is really an apart-hotel with fully equipped family-size units in the center of town.  Although the exterior is somewhat unappealing, units are equipped with cable tv, wifi, cleaning service, a shared party house and barbeques.

The two-star Hotel Acantilado offers basic accommodations equipped with wifi, breakfast, access to the fitness center, spa and an in-house restaurant. Complejo Habitacional Acantilado, is run by the same people and offers the same amenities.

Note that guests at Complejo Habitacional Acantilado must check in at Acantilado Hotel down the street.

For budget travel, there are a few of campsites equipped with showers and parillas (barbecue grills) for preparing food.

Las Grutas has a couple of dozen restaurants and cantinas, all packed into the town’s center around a few blocks.

Here you can enjoy fresh seafood dishes are hard to impossible to find in Buenos Aires. On the local menus are dished such as fried squid rings, the above mentioned cornalitos, crab soup, seafood casserole, clams, octopus, raw oysters, and scallops au gratin.hat.

As with other destinations in Argentina, ask locals for recommendations and look for restaurants that are full of diners.

Budget travelers with a kitchen will find grocers and fresh fish.