*Editors Note: Le Bar closed in April 2012 after five years of business. Check our list of other bars in Buenos Aires.

There’s something sweet about downtown cocktail lounge, Le Bar. This Parisian-style bar is set in a traditional early 19th century Buenos Aires home, but inside its three floors have been jazzed up with strong colors and original art lying around as if somebody just happened to have left it there.

The ground floor has dark red walls and droplet-shaped lights oozing down from the ceiling like viscous honey. Upstairs there’s a more intimate feel, with small rooms and low set tables.

Founded by French expatriates, this bar is known for its cool atmosphere, rooftop terrace and great music. A DJ provides an eclectic mix, with the focus on slow, funky and sexy to cater to the bar’s youngish crowd. Among the acts featured here are some of Buenos Aires’ most popular deejays. You’re likely to hear hip-hop and cumbia mashups from Villa Diamante or the danceable tropical electronic tunes of Chancha Via Circuita. 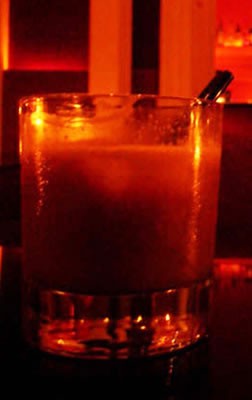 A fairly light menu by Fernando Mayoral contains tasty tidbits such as a calamari salad, chicken and avocado wrap and a lamb burger, but it’s the desserts he offers up that really satisfy. Boost your endorphins with the cold chocolate soup topped with walnuts and orange-perfumed whipped cream. Well-done classics such as crème brûlée (with strawberries) and trifle (with cream cheese, orange and biscuit) are certain to please sugar lovers, while the tangy passionfruit mousse finished with a crunchy almond wafer is guaranteed glee. You’re probably just better off getting the dessert sampler so you can choose your own favorite. Dinner for two will set you back about US$45.

Leo Speroni has designed a fine cocktail menu that could not be classed as overly extravagant, but certainly continues the saccharine theme. Drink a Moloko (Absolut vodka, amaretto and milk) or try one of the many fruit-based concoctions such as the Magdalen (rum, melon, apple and lime) or the Belleville (Absolut Mandarin, Absolut Citron, passionfruit and orange). The happy hour two-for-one drinks last until 10pm, but like most Buenos Aires’ hot spots, Le Bar peaks later in the night.

With Le Bar’s multi-pronged attack on the senses, if your date is not in the mood by the end of the night, you may be beyond help.