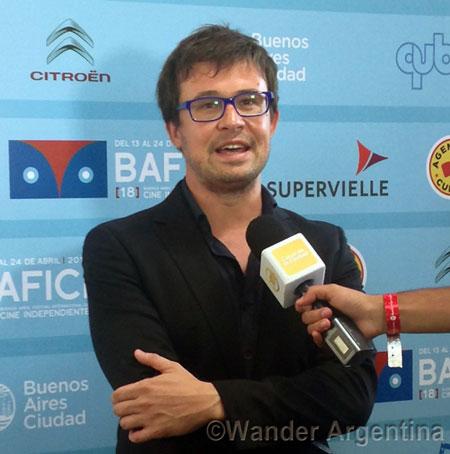 • How did you start working with the Buenos Aires International Festival of Independent Film (known by its acronym, BAFICI)?

I started working in the BAFICI in its third edition, when Quintín became the director. I worked on the catalog for fourteen years. I also worked with books, newspapers and the advertising for the movie theaters. I also worked in programming for ten years and I worked on movie selection. Now I’m the artistic director.

• How would you describe your role as artistic director?

• What was your favorite part this year? Is it your first year as artistic director?

Yes, it’s my first year as director. When we confirmed the participation of Peter Bogdanovich (as a guest) it was a very important moment because he is a very important director for the history of cinema, and he has made movies that I value a lot. ‘The Last Picture Show’ or ‘Texasville’ are fundamental for anyone who is interested in cinema. They are very important movies.

• And what is the part that you liked the least?

(laughs) I was going to say doing interviews, but that’s not true. No, to be honest I’m enjoying every minute of it. It’s one of those things that when you’re a child you don’t even know what a film festival is, but once you know what it is any cinephile would love to direct one. And to be able to direct a festival in your own city, it’s incredible.

• Were there any surprises, or things that were harder than you thought they would be?

There were a few things to do with production and management that I paid less attention to before (I became director). And the difficulty of putting together an event, that surprised me. Everything that goes into putting together a press conference, there’s a lot of people involved. Apart from that, I was very involved in the negotiations for the films with Paloma Dema, the BAFICI coordinator, and that was actually a very fluid process, I was surprised by how smooth it was.

• Is there anything you tried to do differently this year compared to past years?

Yes. We tried to segment the festival as much as possible, to create something that was less of a panorama and more divided into thematic sections, with distinct focuses. And then in each section there were outstanding films with more openings, and more possibilities to be selected for the competition. We tried to have more ‘focus.’

• You also brought the BAFICI to new neighborhoods this year, neighborhoods where films from the festival weren’t shown previously?

• Is there anything particular that you look for in a movie when you select a film for the festival?

I look for something surprising, with a very personal vision. Festivals tend to have pre-established formulas for films, and we tried to stay away from that. We tried to include things that were surprising, fresh, and genuinely personal.

Where do you get the movies you are showing? Do you travel to other festivals to find them, or do people send them to you?

I travel a lot, and people send many in as well. So it is a mix.

• Do you go to many other festivals then?

• Do you have a favorite film festival other than the Bafici?

• Do you try to find a balance between South American movies and movies from the rest of the world? Or do you strive to have a bit of everything?

• Do you have a favorite movie of those showing at the BAFICI?

Of the films that are in the festival, yes I have many favorites: The Umbrellas of Cherbourg, and the films of Peter Bogdanovich. I’m only going to say older films, because I don’t want to put any of the newer films above the others. But yes, I love many of the films showing in the festival. And there are many that I would love to see again if I didn’t have to work.

• Are you originally from Buenos Aires?

No. I am from Marcos Paz in the Province of Buenos Aires.

Since I was a kid I’ve loved going to the movies.

•You lived next to a movie theater right?

Yes, I’ve lived next to two movie theaters in Buenos Aires. One was the Gaumont , which is now going to host the BAFICI opening ceremony. So I’m very happy about that.

• When you aren’t working on the BAFICI, what do you do?

I work for Qubit, a video platform. I’m a content curator for them, and I also write film reviews for La Nación (newspaper).

• If you could do anything, what would your next professional project be?

I don’t know. Right now the BAFICI is enough for me. After that, I still don’t know. I don’t want to make plans for the future right now.