The Argentine ghost town of Alemanía, a stop on the La Vuelta a Los Valles drive through Salta, is a not-to-be-missed spot for adventurers.

Alemanía is the starting point for the Quebrada de las Conchas (The Shells Gorge), the 60-kilometer stretch of multicolored rock formation between here and Cafayate.

A depot of Argentina’s once-expansive railway system, the town is said to have been coined ‘Alemania’ (without an accent) in 1617 by local indigenous tribes. Most locals now say the town was named in honor of German workers who worked on the railway lines through here (‘Alemania’ means Germany in Spanish, but the explanation doesn’t account for the accent later added on the ‘i’).

⇒ Book a Two Day Trip from Salta to Cafayate 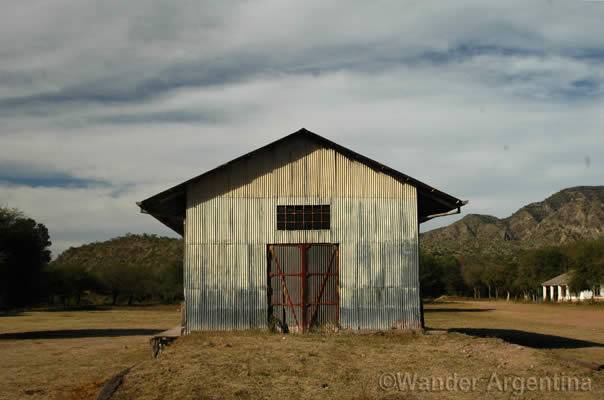 Alemanía was the last stop on the Belgrano railway line from Salta, which was supposed to be continued onward to Cafayate. Between 1916 and 1920 the town held a few hundred residents, attracted by the abundance of work brought by the expansion of the railway lines.

The town’s folklore likens it like the wild west — a refuge of debauchery, where people came to earn lots of money and party for days at a time, enjoying the local Torrontés wine. The railroad work was put on hold during World War I and was never completed.

The railway line was closed for good in 1971 and today only eight families reside in the immediate area. The old train depot has been converted into an art gallery with some unique arts and handicrafts on sale. The few die-hard descendants of the railroad workers who remain here have their land titles and not much else. They live without modern conveniences such as electricity or telephones, and are so eager for visitors that they will likely treat you like long-lost friend.

Ask for a ghost story and explore the turn of the 20th century buildings and railway wagons.

The most action that Alemanía sees these days is as the setting for film sets, such as 2010’s remake of the horror movie, ‘And Soon the Darkness’:

You can camp in Alemanía, or just take a dip in the Río de La Conchas, (Conchas River), but you’ll have to carefully cross the old train trestle to reach the accessible side of the riverbank.

The residents will provide you with fresh water, just throw them a few pesos as thanks — visitors will notice that they have no source of income here aside from the few pottery, wood carvings and wool products they produce and sell.

If you’re camping you can hike the surrounding hills and visit the Cascada de Alemanía (Alemanía waterfall) three hours away, ask locals for directions.

Alemanía – 99 km south from Salta on Route 68, at kilometer 107. You’ll pass by here if on the popular La Vuelta a las Valles scenic drive.

Camping is your only option in Alemanía. Bring all your own supplies — the closest place to buy food is a few kilometers up the road. Also secure your food well as there is lots of wildlife in the area. Be sure to meticulously clean up your campsite, pack out all your refuse, and be generous with the locals, who share their territory free of charge.

The artisans in Alemanía make some very interesting art, wood, pottery and wool items that you won’t find elsewhere. Since there’s no radio, TV or even many neighbors to hang out with here, the residents dedicate a lot of time to their crafts, which are very reasonably priced.

⇒ Book a Two-Day Tour from Salta to Cafayate

Wander Argentina can arrange a trip to Cafayate as part of a customized Salta itinerary.

Get in touch via our contact form with the subject line ‘Cafayate’.