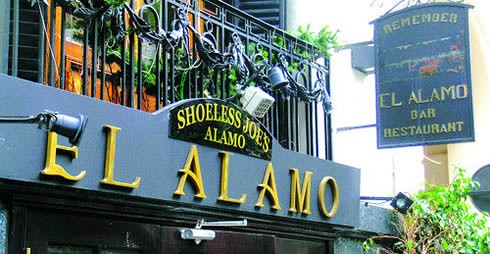 El Alamo is an ex-pat owned American sports bar in Recoleta that is to some a beloved refuge for the young and homesick and to others, a loud, drunken expat nightmare.

Shoeless Joe’s El Alamo (as it’s officially called) was once known as the mecca of American-style hedonism in Buenos Aires, reminiscent of the dive bars you can find along the highways of any major American city with bikini contests and a ‘free beer for girls’ policy. It was a place you could find older American men throwing back pitchers and having confused, barely bilingual conversations with their Argentine, er, ‘girlfriends’ at six in the morning.

In the last few years El Alamo has toned it down a bit, the management has changed hands and it is no longer open 24 hours a day. Unfortunately they also did away with their popular American breakfasts. Overall, the Alamo these days is a slightly less seedy version of its former self, which is good or bad, depending on whom you consult.

Sports on TV, Singles at the Bar

The ground floor has ample bar space and is one of the most reliable spots in the city to catch an American sports game, as well as international rugby and soccer. (The over-30 crowd looking to watch their favorite team in a slightly less rowdy environment may want to consider the nearby Casabar though.)

El Alamo’s re-modeled smoking section upstairs has expanded table seating and an infinitely more attractive environment. Both the upstairs and downstairs bars serve up cheap pitchers of lager and a menu of American fare (wings, Philly cheese-steaks and even nachos). 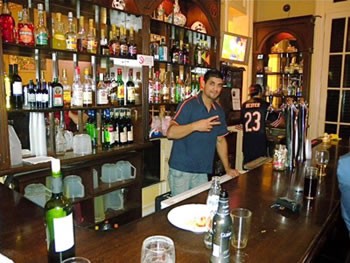 Despite its excessively ‘Yankee’ vibe, the majority of the customers at El Alamo are Argentine, particularly younger locals who come to practice English with foreigners (and consider it a bonus if their conversation partners are of the opposite sex).

During play-off season expect game days to fill up the bar with English-speaking students and ex-pats. The best night for young singles on the hunt is Thursday — the continued ‘free beer for girls’ policy seems to aid the fellows in achieving a high success rate. A nominal cover charge starts after 10 p.m., but is redeemable at face value for food and drinks.