At Florida 460, between La Valle and Corrientes sits the Argentine Rural Society in one of the few remaining former aristocratic homes along Florida Street.

The building’s construction began at the end of the 19th century and was completed in 1917. It is the former home of the family of ex-president Roque Sáenz Peña, who died before the drawn-out construction was complete.

The building reflects Buenos Aires desire to emulate French architecture in the early 20th century, with its huge wooden door and decidedly European style. It was drafted by prolific Belgium architect, Jules Dormal who also designed many other buildings in Buenos Aires, most notably the famed Aguas Argentina Palace, considered by many one of the most beautiful buildings in Argentina.

Today, the Peña home is owned by the Argentine Rural Society, established in 1866 and today known mostly for their annual livestock show, La Rural, held annually in Palermo.

The high-end real estate housing the non-profit Argentine Rural Society is a testament to the importance of agriculture to the old wealth of Argentina. The red paint stains above the doorway are the lasting evidence of the number of protests held here through the years— historically the Rural Society is noted as an institution designed to keep the wealth in the hands of few. Today the Rural Society is not as insular as it once was but protesters maintain that it still serves only to propagate the needs of big business. A visitor will have to be very persuasive to get the chance to go inside and take a limited peek, as the institution’s doors are usually closed and gated off. 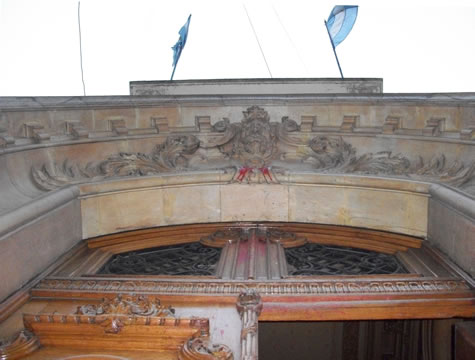