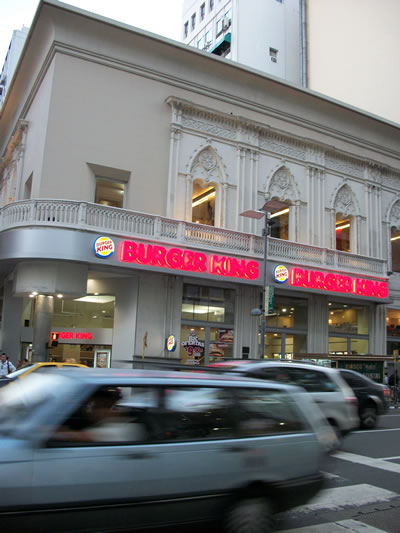 All along Buenos Aires downtown Florida Street visitors will find beautiful historic buildings occupied by multinational corporate chains—it’s an unfortunate reality for traditionalists but these buildings, unlike the Naval Center and Argentine Rural Society, are some of the most accessible for viewing.

The most notable example is found on the corner of Corrientes and Florida — the neo-gothic former residence of the Elortondo Alvear family, constructed in 1880.

Since the 1990’s the Venetian-style building is occupied by perhaps the world’s most elegant Burger King fast food restaurant.

“It’s a clash of cultures but at least they didn’t demolish the building,” says Buenos Aires’ tour guide and University of Buenos Aires professor, Eduardo Mallorens.

Even if you’re a vegetarian, or you came to Argentina to eat steak– not hamburgers, it’s worth slipping in and climbing up the grand stairway to the second story. There you’ll see a huge central dome with a five-panel leaded-glass ceiling and beautiful moldings and frescos in each separate room of the dining area.

The high profile corner lot is also noted as the site of the former home of Ana Díaz, who arrived in the country in 1580 as one of Argentina’s first female settlers. She remains a quixotic figure in Argentine history. 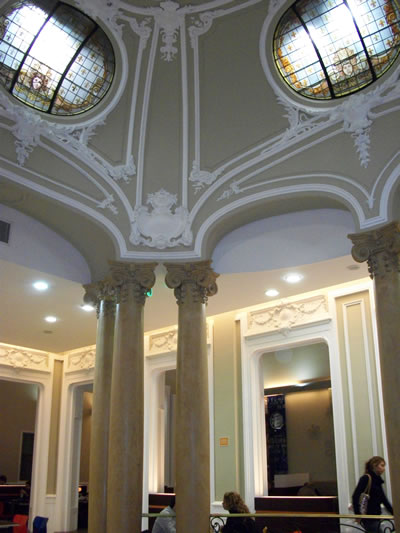