Anyone arriving in Buenos Aires for the first time during the month of January will find themselves in an empty metropolis and questioning, ‘Where are all the people?’ The answer is that everyone clears out of the sweltering city in the summer and heads to the beach. 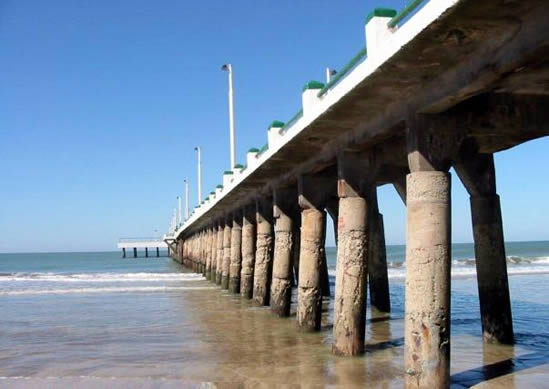 The seaside city of Mar del Plata is the over-crowded beach of choice for many Argentines who don’t seem to want to break away from the Buenos Aires bustle, but there are other, more laid-back towns to choose from along Argentina’s sprawling coastline.

Mar de Ajó, a five-hour bus ride from the big city is one alternate seaside choice that you probably won’t find listed in your guidebook. Near the tip of the Atlantic coast in Buenos Aires province, this 19th century fishing village was officially founded in 1935 when tourism first arrived in the area.

Today families of middle-class porteños (as Buenos Aires’ residents are known) looking for a more relaxed seaside refuge come here to wind down during the summer months. In the last ten years, with increased migration from other provinces and the addition of the Atlántida Argentina University here, Mar de Ajó’s populace has swollen from 13,000 to 25,000.

The Town: Tawdry but Endearing

With its 1960’s/70’s seaside town vibe, Mar de Ajó is admittedly tacky in places, but that’s part of its scrappy allure. The buildings are a combination of old hotels, apartment blocks and lovely little shacks. As with many of Argentina’s less-expensive beach destinations, the shopping and restaurant precinct is decidedly tawdry.

At dusk the main drag becomes a pedestrian-only affair, jam-packed with people looking to be fed and entertained. There is a good mix of restaurants, gaming arcades, pizza parlors and ice cream shops, replete with street performers, a cinema, a theater and a casino/bingo hall. Accommodation and food prices are just slightly higher than in the city of Buenos Aires.

Before the 1914 construction of the Panama Canal, Argentina’s Pacific coastline saw a lot of navel traffic with boats headed for the Strait of Magellan. Many who ventured too close to the coast found themselves run aground by the strong winds at Mar de Ajó and now form part of the town’s ‘ship graveyard.’

The most famous wreckage here is the Margaretha, a German vessel that ran aground in 1880. For many years Mar de Ajó was know as Playa La Margarita, in honor of the battered tanker. The Margeretha’s remnants can still be seen sticking out of the sand at low tide.

Another Mar de Ajó attraction is the town’s large pier where fishermen catch Southern Kingcroaker, Seabass and Stingray to fry up for dinner.

Regular beach goers bring their own umbrellas and chairs to the shore here – or, as in Mar de Plata — lease private tents or carpas by the day, week or even month.

A revealing bathing suit is the dress code of choice, no matter what the size or shape of the body, and the deeper, more pre-cancerous-looking the tan, the better.

As at most Argentine beaches yerba mate (Argentinean tea pronounced mah-tay) is the beverage of choice throughout the day, prompting hot water sellers and churro-doughnut vendors to roam the sands in droves.

Groups of weathered men play Tejo, a beach game similar to the Italian game of Bocce, except that rather than rolling balls, flat wooden discs are used. The idea is to try and get the discs as close to the small white jack as possible.

Although played casually on the beach with the ‘court’ drawn out on the sand, you will see that Tejo can be taken as seriously as the World Cup Finals.

Compared to its more upscale counterpart, Mar del Plata, the beaches at Mar de Ajó are marginally cleaner and a lot less crowded, with some of the fine beige sand visible between all the sun worshipers.

The cool Atlantic water provides some respite from the sizzling sun, and here it is slightly less bone-chillingly cold than in Mar de Plata, as it sits 157km further north up the coast. The wind often creates swell that makes for some modest surfing, challenging swimming, and fun kite and bodysurfing.

Mar de Ajó is evidence that one cannot experience Porteño culture by only visiting Argentina’s capital; here you’ll see another side to the urban dwellers, who really can let the city chaos slip away with the sea breeze.