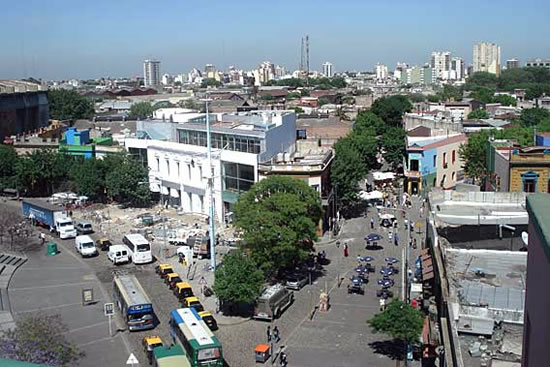 This beacon of modernization is set alongside the otherwise traditional, working-class neighborhood’s rugged waterfront and is a few steps from El Caminito, its colorful tourist-friendly strip.

Fundación Proa,  or the Bow Foundation, organizes itself around the faded history and imagery of the port. The gallery is set in a restored 19th century building, expanded in 2008 by the Milanese architecture firm Caruso-Torricella Architetti.

Upon Proa’s 2008 re-opening, the foundation showcased 130 of Marcel Duchamp’s works in an exhibition entitled, ‘Marcel Duchamp: una obra que no es una obra ‘de arte’ ‘ (A Work That’s Not a Work ‘of Art’). It was the first individual showing of Duchamp’s work ever in Latin America. Duchamp was a fitting choice for Proa’s inaugural exhibition: much like Duchamp created works of art made from found objects with his Ready-mades, Proa celebrates the past while consecrating avant-garde art and technology.

More recent exhibits at Proa include, ‘Iman: Nueva York,’ a show dedicated to Argentine artists living and working in New York during the 1960s, and ‘Las Pampas: Arte y Cultura en el Siglo XIX,’ an exhibit of the intricate silver and textile work of the old-world gauchos (Argentine cowboys).

In January of 2011 Proa presented,  ‘Art in the Auditorium III and Of Bridges and Borders’. The contemporary video art exhibition was organized by the Whitechapel Gallery of London. Of Bridges and Borders brought together the work of artist and writers in contemplation of the global contemporary art world. The show was curated by Parisian-born artist, Sigismond de Vajay and included 118 collages by Thomas Hirschhorn and Carlos Garaicoa’s ‘El Invitado’ (The Invited), a presentation that ponders the phenomena of immigration.

In addition to the vast exhibition space, there is an auditorium, a library containing all of Proa’s catalogs and a popular rooftop wifi café with wonderful views of the neighborhood and the River Plate.

The multi-use auditorium is used for film screenings, concerts, and lectures, and has also played host to two video exhibitions. In 2008, Proa hosted a professional development workshop for journalists from across South America with author and The New Yorker contributor, Jon Lee Anderson.

Check the website, linked below for the current season’s program. If you can’t make it for a guided tour you can also download mp3 audio guides in English and Spanish from the website.