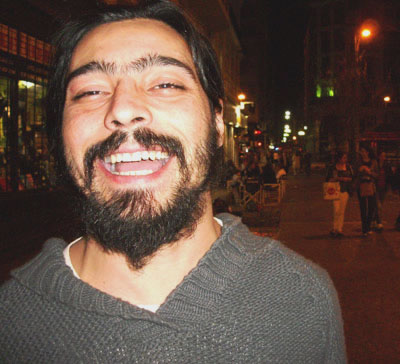 Q: How long have you been in Buenos Aires and how did you end up here?

I’m from Rio Negro—El Bolson. I came to Buenos Aires four years ago after I met my girlfriend when she was visiting up there and we hooked up, so I came down here and we started making artisan items to sell together.

• What did you do in El Bolson?

I worked in construction and carved wood items for a manufacturer.

• You’re from El Bolson, the hippie capital of Argentina, are your parents hippies?

No not at all! They’re cool though. They called me on my birthday. In June, I was back there for my dad’s birthday. We had a barbecue, it was cool.

• Why did you start doing selling items on the street when you came to Buenos Aires?

There weren’t that many jobs in Buenos Aires when I came. At first, I had like four jobs in three weeks. I couldn’t deal because they pay you like two bucks. You can earn tips, but still!

• What were the jobs you did when you first came here?

Everything! I worked as a waiter for two weeks and I delivered pizzas on a bicycle. That tired me out. I always tried to get the deliveries that were the closest.

• So what happened with those jobs?

They always fired me for arriving late. They bust your balls.

So, it just worked out like this. I didn’t want to work for someone else and have a boss breathing down my neck. They just exploit you.

The thing is though that doing this, you have to have respect for yourself — otherwise you’ll just stay in the house watching TV.

• What was you best day ever working out here?

The best day, oh, this is a good one. I was walking along and I kicked a rock or something and there was a little package with like 25 grams of pot in it. That was the best day. Sometimes I meet girls too, but I have a girlfriend. Are you going to print all this?..I wouldn’t do anything though, because I would feel guilty.

• What about your worst day working?

Hmm, worst day. I’ve had some bad days but I try to forget them.

• How do you get along with the all the other vendors you work alongside everyday?

We all have good vibes, at least with me. We’re all our own bosses and the laborers — all rolled into one.

• Do you ever have problems with the police or anyone else here?

Until about two years ago we did. (Mayor Mauricio) Macri doesn’t understand that people can be self-sufficient. He thinks that everyone needs to work for someone else. But two years ago they passed a law stating that this is a  legal way to survive, that they can’t charge taxes and that we’re free to use public space. So they don’t bother us anymore.

• What about the people out here who aren’t selling handmade goods?

They have a different concept than artisans; they are all about the numbers.

• Do you think you’ll always do this?

No, I’m going to do something else in the end. I’m not real sure what at the moment though. My girlfriend studies. I don’t study anything though.

• How much longer do you see yourself doing this?

That’s a good question— I’m thinking. Maybe ten more years, but within those ten years I’d like to do many other things.

I’d like to buy an old bus and travel all over and do this on the road.

• Why do you sell on downtown’s Florida Street as opposed to San Telmo or Recoleta?

Well downtown, there’s bunch of people, so there is more opportunity to sell. On Sundays I sell in San Telmo though.

• But around here on the southern end of Florida, it seems like most people are just passing through, not particularly shopping.

That’s true, but a lot of people buy anyway though because they are programmed to buy from a young age. Women especially buy impulsively — that’s why everything I sell is for women.

• You are pretty flirty with women too it seems, does that help you sell?

I’m not flirty — I’m just friendly. All I do is smile. Really, I’m the biggest idiot in the world; I’m not a player at all. My girlfriend thinks so though!

• What is your hobby?

Hmm, my hobby is working. I come out and sell everyday, unless it rains. If I’m not here, I’m cutting or painting fabrics.

No, I’m not really because sometimes I come late. Today I came at 5 p.m. and haven’t earned anything.