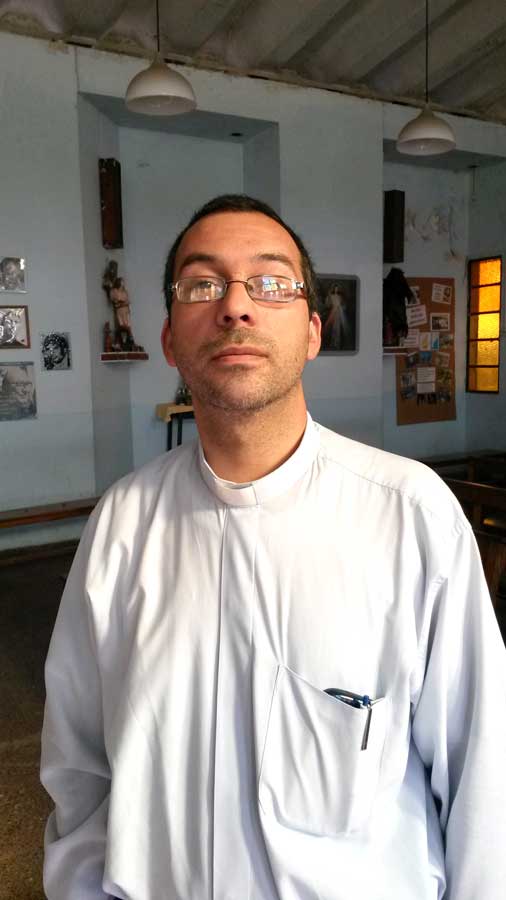 • At what age did you decide you want to dedicate your life to religion?

When I was 16 years old my brother died in a fatal accident.

This situation made me seek God.

I got older and soon after I was invited to a parish – it started there.

• Can you tell me a bit about the work that you are doing at the moment?

The parish is a place where people come and stay, in other parishes you just go and attend religious services.

I try to help them to grow in a safe place to widen their horizons.

I’m thinking about this at this moment, to let them go out of here or not. I think I have to respect them to also let them grow and decide.

They just don’t know they can study or earn a lot of money, or apply for a position that could give them a more comfortable lifestyle and they just do what their parents have done.

The families are broken here, most of my time I accompany young people.

I find that all of them are sons and daughters of fathers who abandoned their family.

There is a lot of physical violence and other kinds of violence. Alcoholism is huge here. There are many who were raped in childhood.

The most horrible thing is that they have naturalized that behavior.

• So most of the work you do is with young people?

Yes – with young people because I think they need it more, in my assistance, I can help them.

• So the church offers them a place of refuge. What do you hope to achieve in the future and are you seeing any changes?

Yes – for example this – (pointing to the homework of a young boy studying in the parish).

I think that, of course, I can’t teach them everything.

Many times (it’s about) the lack of this being with the ‘other.’

The mother has to go to work and there is no father.

Simply when the boys go back home after school there is no mum to do homework with them. So they don’t do their homework.

This simple thing means the child is educated here.

Maybe he does not pass his exams, by 16 when he or she has to retake the year – (they) abandon their studies, go to work or are about to be themselves a father or mother because they got pregnant.

It’s very difficult. I find that I can be with them maybe, but I cannot make them do another thing.

Maybe with my advice and presence and just my hugs I could make a difference.

I don’t know if I have to change their lives, I don’t think I have to do that because they have to live what they decide to live and what they can live.

I mean it’s not them and us, (that) their lives our horrid and we have the power. I don’t think in that way. I think you can live better and I can show you that, but you decide.

It’s difficult because they are not my ‘patients’.

I have many tasks. In general, I get up early and pray.

After my prayers I have many places to visit.

Maybe I go to bless a house of one of the families who called me. Maybe I go to a meeting with one of many institutions here.

I work together with the justice and health system also and education as well, different schools here.

So I have to go, for example, to one of the schools to talk with one of the headmasters.

We are working on a project that has to do with Nazism and the Holocaust and also the last dictatorship here in Argentina and human rights with teens.

I do this one-on-one, in confession or just people who come to speak with the priest.

I try to help them in whatever I can, not only religious things, (with) what they need in general.

There are many activities here in the parish that has to do with culture, sports, art. I visit the different groups and relate with the people who come to the groups and also try to give them what they need.

Also the religious part: mass, baptisms, visiting them in their houses, attention when one dies – that’s very important.

• How large is the Parish?

• Are you the only priest in this parish?

There are two of us, but we are very tired and the people here are very religious.

For the catechism we have 600 children every Saturday — it’s a lot.

For all the activities with the children they receive something to eat because it is very important for them.

We need a lot of milk, chocolate and food and it is not that easy to find. No one gives us money.

That is important because for some it could be the only meal they receive in the day so it is very hard.

I think my place, what I do is also to help them to fight to be hopeful.

I think it is very important, just being there beside them, praying with them and showing them that they can be better. God’s will is for them to be better.

• Are the people here are very religious and attached to their faith?

Yes, because they are very poor and because most of them are from Bolivia and Paraguay and they are not from the cities, but from the countryside.

They were very religious in their countries so they bring that with them.

They come here with those same roots of the faith.

• How has the Catholic faith changed in the last few years?

That is a difficult question to answer because I know him very well (points to a picture of Pope Francis on the wall).

For us in Buenos Aires and in particularly (us) priests, who knew our former Archbishop well, I am really not astonished or surprised.

• So you knew Pope Francis when he was Father Bergoglio well?

He was my bishop and my father.

We spoke many times.

• Do you think he is more of a political pope?  He is more outspoken on certain topics than other figures in the past.

I think that he is himself. Now he can just show another dimension and here he couldn’t — he had limits and now he can be himself and say what he likes.

I heard from the other priests that he just talked about the gospel; he did not say anything else.

He just preached the gospel – just a simple preacher but it’s the Pope speaking to the U.N. and the U.S.

• Some say he is quite a modern pope, he has Twitter and Facebook and he’s become more accessible to the people in this way –

Here he didn’t even use email!

• Do you think it’s important to do more things to modernize to become more accessible to the people?

Yes, of course. I think there is an army of laborers and workers helping him answering things.

For instance, I went to Berlin last year to a seminar. I really miss him.

The last day we ate breakfast and I went to the hotel lobby and asked them for paper to write three lines,

“Thank you, now I am very well in the parish that I am in and I pray for you.”

I gave it to the priest who was going to the Vatican City.

He told me that he wouldn’t see the Pope but that he could give to his secretary.

Ten days after that I received — with his handwriting that I know very well — a card, just a card.

I was thinking, he receives cards and letters from the whole world and he found the time to read (my message) and write back.

For me it was very important and his way of being present – I think that changes the church.

He is with the people, as simple as that.

Like Jesus, there with the people with the suffering ones.

I insist on this – he hasn’t changed – he does the same things as he did in Buenos Aires.

• What do you enjoy doing outside of your faith? What are your likes and dislikes?

I love singing. I’m interested in reading everything. I like psychology and the application of psychology as to relate better with others.

I like to study about the culture of my parishioners. Now I’m here with the Bolivian and Paraguayan people, so I’m interested in studying their rituals and ceremonies.

I like languages, spirituality. I like to seek and to reach and to find out how people find happiness or live happy.

Are you originally from Buenos Aires?

Yes – my mother was born in Paraguay, but she emigrated when she was 18.

Do you have a favorite place in Buenos Aires?

The bookshops on Corrientes. I don’t go to those places unless I have to go with another person such as a tourist, but I like doing that.

What is you’re opinion on Argentine Folk Saints such as Gauchito Gil? What do you think of them?

The story says he was like a Robin Hood – people are devoted to him.

Of course, if someone asks me to come and bless the image I do it, because I think God wills people to do something religious.

A lot of people who come here would like to help communities such as the one you work in, what are the different ways they can do this?

I used to say that the best way is to come and visit, if you visit you can find what they need and you can give them that.

Time – anyone who can come and do homework with the boys is excellent.

We need food because there is no one who gives us food and there are a lot of people who eat in the parish.

Money is also very important so we can buy what we need. If someone comes and says they want to help, I tell them to come here.

Many people are not interested and they help (only) with food or money or whatever.

But the best way is to come and visit the area and the people because they can find what they need and give it to them.