You are here: Home / Culture / People / Jewish Life in Argentina: A Cultural Guide

Argentina is home around 250,000 Jews — the sixth largest Jewish community in the world, and the largest in Latin America. Buenos Aires’ Jewish community is active with synagogues, schools, youth groups, kosher restaurants and other Jewish organizations that one would expect to find in other world hubs of Judaism.

A trip to McDonald’s may not be the first item on a Jewish traveler’s to-do list when arriving in a new city. But there is something special about Buenos Aires: it is home to the only kosher McDonald’s outside of Israel.

The kosher version of the golden-arched fast food chain is found in the Abasto shopping mall, in the ethnically diverse neighborhood of the same name. There are long lines on a Saturday evening following the end of the Sabbath as Jewish groups and families alike hustle for the famous burgers and fries.

Today Argentina is home to around 250,000 Jews, making it the sixth largest Jewish community in the world, and the biggest in Latin America. The number of Jewish inhabitants in Buenos Aires is equal to the combined Jewish populations of Brazil, Chile, Mexico and Uruguay.

The vast majority of Argentina’s Jewish population is now located in Buenos Aires, though smaller communities can be found in other parts of the country, especially Rosario, Córdoba and Santa Fe.

Much of Buenos Aires Jewish life centers around the garment district of Once and Abasto as well Villa Crespo, (which has a little known section called ‘Villa Kreplaj‘ in reference to the largely secular Russian Jews who settled here after World War I). The briefest walk through these areas gives a good impression of the Jewish presence.

Among some of the most spectacular synagogues here are the Grand Temple of Paso, considered one of the most beautiful in South American and Yesod Hadath, a large Sephardic synagogue dating to 1920.

While the preferred resting place for better-off Buenos Aires Jews is the Jewish-only Liniers cemetery, Argentina has 45 Jewish cemeteries in total.

A couple of Jewish tombs can even be spotted at Buenos Aires’ famous Recoleta Cemetery, those of Benjamín Breitman, and the Uribe y Lecea family, both decorated with a Star of David.

Buenos Aires is also home to South America’s only Holocaust Museum and an Anne Frank museum.

A smattering of Jewish settlers came to Argentina very early on, to evade the Spanish and Portuguese inquisitions. During the 16th, 17th and 18th centuries some came as ‘conversos’ or secret Jews, those whose families had converted — or feigned conversion — in the face of religious repression.

After Argentina gained independence from Spain 1816, there was a spike in Jewish immigration, mostly from France, with others coming from England and Germany.

Jewish immigration to Argentina began en masse at the end of the 1880’s with groups arriving from Eastern Europe. This period in time gave rise to the mythical Jewish gaucho: Jewish cowboys, who earned their living as farmers working the land.

In 1889, 824 Jews piled onto the SS Wesser bound for Argentina from the Ukraine. The predominately Polish group suffered a similar fate to some large groups of Irish arriving around the same time. They languished in Buenos Aires upon finding the original lands promised were not available. When they finally headed north, malnutrition and a Typhus epidemic caused the death of 67 community members, mostly children.

When the group landed in Santa Fe in 1890, the weary settlers set up the colony of Moisés Ville. The intended name for the colony was in Hebrew: Kiryat Moshe (‘Town of Moses’) but the name was Hispanized in official documents.

The former city dwellers continued to struggle, living out of abandoned train wagons, and reaping little from the land.

Upon learning about the wretched living conditions, the wealthy German philanthropist, Baron Maurice Hirsch, set up the Jewish Colonization Association to help the pioneers buy land and tools.

At one point the association owned 600,000 hectares of land. This enabled Moisés Ville to grow, and in turn the community built four synagogues, Jewish schools, and Argentina’s first Jewish cemetery. Today 250 Jews still reside in the town.

The next year, another Jewish colony, Colonía Mauracio was set up in Buenos Aires province.

Today, the sizable Algarrobos Cemetery and the simple Moctezuma synagogue are still visited by curious travelers. Entre Rios is another province where Jewish settlers established themselves, with 11 Jewish colonies in total.

At the turn of the 20th century another wave of immigration diversified the community, with Sephardic Jews arriving from Turkey and North Africa.

In the 20th century Jewish immigration to Argentina peaked following both world wars and the Holocaust.

By the mid-1930’s the 120,000 Jews in Buenos Aires made up 5% of the city’s population. In the same decade there were Nazi Rallies held in Buenos Aires historic stadium, Luna Park.

Despite the anti-antisemitism of the time, by the early 1940’s Buenos Aires had a thriving Yiddish publishing industry and theater scene.

The Effect of Peronism and the Military Regime on Jewish Life

Juan Peron’s rise to power culminating in 1946 was a delicate time for Argentina’s Jewish community. Following the Second World War at least 180 Nazis were permitted to enter Argentina. As can be evidenced at Buenos Aires Holocaust Museum, the only of its kind in South America, Argentina essentially closed its doors to Jewish immigration beginning in 1938 and stamped the passports of Jews with the Star of David.

Publicly, Perón also expressed sympathy for Jewish rights. He was the first Latin American leader to acknowledge the State of Israel, with diplomatic relations beginning in 1949. He was also the first Argentine leader to seek out Jews to act as government advisers and permit them to hold office.

According to the 1960 national census, there were 275,913 Jews living in Argentina, though it is believed that this figure was more like 310,000, representing the peak of the Argentine Jewish population in the 20th century.

Since that time the population has declined. During the military regime of 1976 to 1983 borders were once again clamped and Argentina was a particularly hostile destination. Some Jewish activists fled the country.

A study carried out by the National Commission on the Disappearance of Persons suggests that of the estimated total of 30,000 people ‘disappeared’ under the repressive regime, 1,900 were Jewish.

Amidst the economic and industrial developments of the 20th century, the main change in Argentine Jewish life is the urbanization of the community. Today, 90% of Argentine Jews live in Buenos Aires. There are 90 synagogues in Argentina, with 35 located outside the capital.

The most shocking events to have affected Jewish life in Argentina took place in the early 1990s when the community was the target of the country’s two largest terrorist attacks of the last century.

On March 17, 1992 a suicide bomber drove a pickup truck loaded with explosives into the Israeli Embassy in Buenos Aires, completely destroying it and other buildings nearby. In total, 29 people were killed and hundreds were injured.

Islamic Jihad claimed responsibility for the bombing and stated that it was in retaliation for the assassination of Hezbollah Secretary General, Sayed Abbas al-Musawi. When evidence emerged in 1998 suggesting that Iran orchestrated the attack, arrest warrants were issued for six Iranian diplomats, who promptly left Argentina.

Then, two years later, in July 1994, a truck loaded with explosives drove into the seven-story AMIA building (Argentine Israelite Mutual Association), a focal point of the Jewish community in Buenos Aires. Eighty-five, mostly Jewish people, died and around 300 were injured.

Although the government and society at large demonstrated its support for the Jewish community in the aftermath of these events, no one has ever been held responsible for the crimes.

Tehran continues to deny any Iranian involvement. A possible link has been established with Syrian millionaire, Monzer al-Kassar, an arms dealer known as the ‘Prince of Marbella’ who is serving a 30-year sentence in a US medium-security prison for his association with the Colombian militant group, FARC.

In Argentina, he has only been charged with falsifying documents to obtain Argentine citizenship, which he says was facilitated by ‘unmentionable’ former Argentine President, Carlos Menem.

Old wounds were reopened for the Jewish community and justice again thwarted when the prosecutor in the AMIA case, Alberto Nisman, mysteriously died on January 18, 2015 after spending 13 years investigating the case.

The following day Nisman was scheduled to present evidence in a closed-door congressional hearing implicating then-President Cristina Fernández de Kirchner and other officials for allegedly participating in a cover-up for Iranian officials suspected in orchestrating the attack, in exchange for much-needed oil.

Events like the terrorist bombings have had a galvanizing effect on the Jewish community.

Today a powerful memorial sits at the former embassy site and the AMIA building has been rebuilt. While security has become a focal point at both buildings, the city’s synagogues, and Jewish community organizations, the events have led to improvements in the occasionally strained relationship between Jews and the population as a whole.

Anita Weinstein, Director of the Federation of Jewish Communities at AMIA, says the community has shrunken in the last 50 years due to smaller family size and a higher level of assimilation than in the past.

Emigration to Israel is another factor.

“Many ideologically-involved Argentines chose to go to Israel to help build the country,” says Weinstein.

After Argentina’s economic crisis of 2001, 25% of the Jewish middle class fell into poverty, further motivating some to relocate. Since Argentina began diplomatic relations with Israel in 1949, an estimated 45,000 Jews have permanently relocated there.

Despite Argentina’s shrinking Jewish population, Weinstein says, “Judaism can be felt and lived in so many ways and that is still the case today. Jews feel very strongly about having played a part in building the country.”

Most practicing Jews in Argentina today are Orthodox and Conservative, though there are a few Reform synagogues.

There is also a large secular community: according to a 2005 study by the Center of Studies for Latin American Jewish Communities, an arm of the Joint Distribution Committee (JDC), the world’s leading Jewish humanitarian assistance organization, 61% of Argentine Jews today have never belonged to a Jewish organization.

This growing secular group typically embraces their culture heritage, including the food, music and literature of Judaism while leaving the religious aspects aside.

“Jews understand that there is now legitimacy to their being part of Argentine society,” says Weinstein.

To see the evidence, one need only to cruise through Once, take a trip to a Jewish colony such as Moisés Ville, or, — as strange as it may sound — the Kosher McDonald’s on a Saturday night. 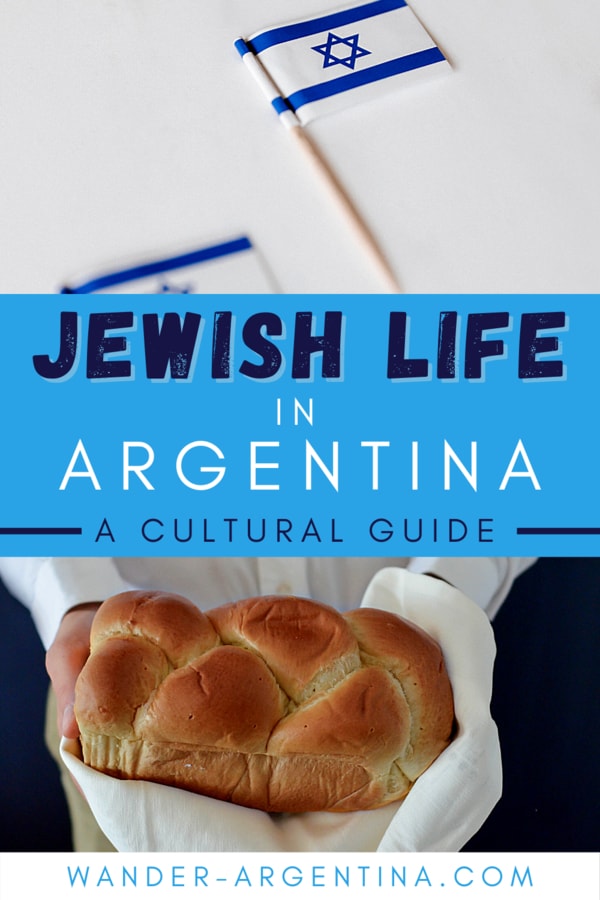 → Check out our Jewish Buenos Aires tours, or