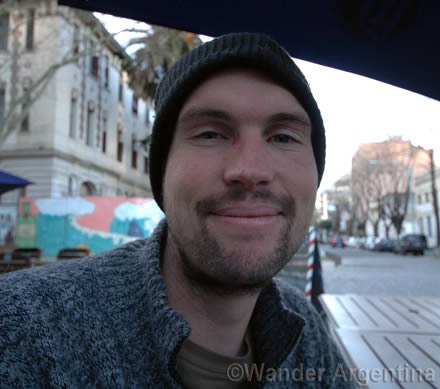 Q: What brought you to Argentina? What was your field of research? What is the context in which Argentina manages to draws intellectual capital from Germany?

I was on my way to Argentina traveling through Central America and followed my ex-girlfriend to Buenos Aires, to work as an English teacher and later found a position to do a postdoc at INTA (Instituto Nacional de Tecnología Agropecuaria/ The National Institute for Agricultural Technology).

My research is cellular immunology, and I was investigating the role of a cow-virus (a model for Dengue fever) infecting certain types of immune cells.

I think Argentina used to have a lot to offer for any researchers. ‘Used to’ because what hinders research are the importation laws making it very difficult to obtain materials essential for research. However, Argentina has very bright minds, top-notch research facilities and a more relaxed and less stringent way of working together, which drew me away from Germany in the first place.

• What was your impression of the development of science and technology in Argentina?

Argentina has some very interesting science centers, universities and research facilities. I was able to visit INTI, INTA, the LeLoir Institute among others and was lucky to get a postdoc position offered at the virology lab at INTA. Unfortunately, the development of science in Argentina over the last two years has not been very positive, in my eyes. Due to the inflation and the importation laws it is almost impossible to get certain consumables from the outside, which in the end meant for me dropping my Postdoc. That said, Argentinian researchers are very patient, resourceful and constantly work on new ways to adapt techniques, methods and keep the research running.

• How did the evolution from serious scientist to prolific street artist come about?

Well it was around when I started my PhD in New Zealand. I just had finished my Masters at a Children’s Hospital in Cape Town, South Africa working on HIV and seeing all the heavy impact of AIDS, poverty, and general chaos on a third world country and now I lived in a place with millions of sheep and a newspaper that told me about cats being rescued from trees. I would say I was in a state of shock and painting was a way to vent to release all of that pressure and inability to comprehend ‘first world problems.’

So I started to use the phrases that I heard on the street of people complaining about random things then putting a twist to them, spraying the stencils on newspapers and posting them up in the middle of the night. From that it just grew, I would do more and more and it became a part of me. I took some wheatpaste posters with me when I traveled to Canada and then later to Central America. Here, in Buenos Aires it all became much easier and I am able to paint entire houses.

• Describe the Buenos Aires street art scene. How is it compared to other places you’ve lived or visited?

Buenos Aires is a paradise for street artists. Back in New Zealand I had to paint in the middle of the night, always being afraid to be caught and kicked off university right into jail with a hefty fine. I would mainly do wheatpaste posters, always dodging the police cars and if I saw someone coming towards me, I would pack my stuff and run the opposite direction. In the five years I painted there I didn’t meet one other street artist or graffiti writer and only my closest friends would know that I was painting.

Here, it is the other way around. There is no law against graffiti, people paint in the streets during daylight hours, especially on the weekend. I can go to an abandoned house or along the train stations and paint huge murals that take multiple hours and maybe even days to finish. You meet a lot of people here —neighbors offering you some mate, people passing by chatting with you; it is a very open and friendly environment to paint. You also run into many artists painting on the streets, I don’t feel I have to hide my identity or face when painting so much.

• Have you ever had a cop or angry neighbor encounter while painting in the streets of Buenos Aires?

I had the police called on me once by an angry neighbor. They came in three cars and surrounded me and two kids (literally children, who were painting next to me) and controlled my bag and so forth. We talked a bit and after it became clear that we didn’t have permission to paint there they said, “Please leave” and that was it. They left, we packed our stuff and left. I never heard of anyone getting arrested or going to jail for painting in the street, I think the police have other stuff to do. Very often I see them passing by, but they normally do not stop.

• You introduce foreign visitors to street art here. What are some of the things about the art scene here that most impress, inspire or surprise them?

I think for everyone that knows a bit about how difficult it is to do street art in their home country, they cannot believe that you can illegally (as in: without given permission of the owner) paint an entire building over the course of several days without getting into trouble, but instead making friends with the neighbors because finally that old building looks nicer.

• Where can visitors see your work in Buenos Aires?

I am painting all around Buenos Aires under the name LAPIZ. I have two pieces in Retiro on the way to Reggazoni’s workshop at Libertador & Suipacha; two more at the Estacion Dr. L. M. Drago on the Mitre Line in Villa Urquiza (between Mariano Acha and Holmberg on the site of the tracks); one at the corner of Concepción Arenal and Amenabar, and a big one on the outside walls of Hospital Torcuato de Alvear in Avenida Warnes.

• What do you think the future of street art will be? Can it be a viable way to earn a comfortable living? Do you see yourself salivating at the site of large blank walls on which to paint when you are 75 years old?

I always hope that everyone will be painting and doing art outside, to share their ideas and add colors to the cities. As the saying goes ‘white walls say nothing.’ There is an artist in all of us.

I think street art will get more and more commercial; I wouldn’t be surprised to see something like, ‘America’s Next Street Artist’ or some other bullshit along that line in the future.

I think there are street artists that can live off it, but for most I don’t think it will be a comfortable living if you do not go into producing art that can be sold and hung up in galleries. Of course, that has nothing to do with street art. When I finish a painting and leave it on a wall, it is not mine anymore —it is part of the street, the people, it is free and belongs to everyone.

But you also have to live off something, so I do silkscreen prints as well. I am not sure how it will go for me, but I think I will always look for walls and hopefully always will be independent enough to paint what I want on the streets for the rest of my life.

That is difficult question to answer. I very much like the work of Fintan Magee, who came for a visit earlier this year and who I was very lucky to assist painting. Then there is Primo who painted a beautiful jazz musician on a recording studio in Villa Urquiza. And Triángulo Dorado who painted along many train lines, Jaz is great too, I very much like his style and story behind the paintings.